Bridge City hammers out SECOND PLACE in the SETX High School Fishing Championship! Placing second out of 384 teams, freshman Ethan Bourque and Tanner Wilson had a two day combined total weight of 35.56 lbs. They also finished in 10th place overall for the year and came away with $9,200 in scholarships and prizes. They were named Bridge City's Anglers of the Year and received additional scholarships from the team. Also pictures is boat captain, Darren Wilson who helped make all the tournaments a success. 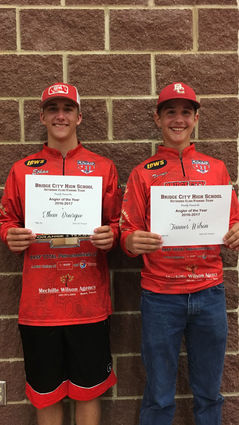