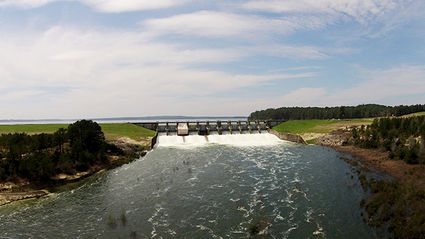 Rainfall from this week’s federally declared disaster, Tropical Storm Harvey, has pushed the water level in the 185,000 acre East Texas lake well past the point of 172.5 feet at which federal rules require dam releases.

“At 9 a.m., we had a reading of 173.68. That puts us in stage 6 of spillway guide operations,” said Ann Galassi, assistant general manager for the Sabine River Authority, which manages the hydro-electric dam.

She said stage 6 entails opening all 11 of the dam gates open six feet, which is causing a release of 81,520 cubic feet per second.

“The level has been pretty steady since 3 or 4 this morning, so we’re thinking it’s not going to rise any more,” Galassi said.

“We’re taking readings every hour, trying to minimize the gates we have to open.”

Galassi wanted to reassure residents downriver that Toledo Bend has no effect on water flowing in Orange County’s Adams Bayou and Cow Bayou.

“The [Toledo Bend] water is coming down just the Sabine River,” she said. “The flooding from Adams and Cow Bayous is from localized rain we’ve received.

“Hopefully, some of that is going to recede.”

By that time, Tropical Storm Harvey, which began as a Category 4 storm last Friday night, had dropped rainfall amounts of 30 to 40 inches on Southeast Texas. 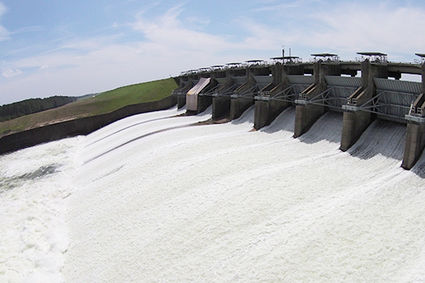 The record crest for the Sabine River at Deweyville, 33.3 feet, followed the release.

Toledo Bend Reservoir, located north of Burkeville on the Texas-Louisiana border, is the largest man-made body of water in the South.

It is primarily for the purposes of water conservation, hydroelectric power generation and recreation.