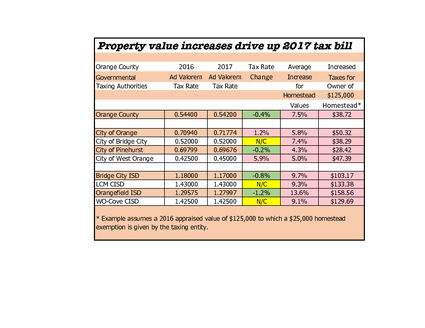 “In December, we will be mailing out letters to every homeowner in Orange County asking them what kind of damage they have remaining [from Tropical Storm Harvey], as of Jan. 1,” Mike Cedars, chief appraiser at the Orange County Appraisal District, said recently.

Those bills will start hitting mail boxes in October and will be due Jan. 1, 2018.

Orange County taxpayers are stuck between the rock of millions of dollars of property damage caused a month ago by Harvey and the hard place of 2017 tax bills that will go up, because countywide tax values had increased by nearly $200 million between 2016 and 2017.

“I hate what’s happening to people. But at the same time, we don’t need our entities to collapse,” Cedars said.

“We want schools to educate our kids and we want roads to drive on. There’s a difference between waste and what’s needed.”

A number of folks have asked about getting their 2017 appraisals lowered, since their homes will be worth a lot less when they pay the tax than when it was appraised on Jan. 1, 2017.

Legally, it could have.

Realistically, not so much.

Reappraising the number of properties that were damaged by Harvey would be nearly impossible to do in a timely manner and cost-prohibitive.

“I only have six [home] appraisers on staff, so we’d have to hire people,” Cedars said.

“To do the whole county, I could easily see spending half my annual budget [of $1.8 million].”

“One of the codes says that in a disaster, the schools, cities and other entities can request a reappraisal,” he explained. “They would have to pay the total cost for me to reappraise.”

But paying for a second 2017 appraisal is not the biggest reason such a move was notcontemplated after Hurricanes Rita and Ike, which occurred about the same time of the year.

And the cost of governing.

July 25 is the date each year that state law requires the Appraisal District to turn over its final appraised values to the Tax Appraiser-Collector, Karen Fisher.

She, in turn, passes the information to each of the two-dozen odd taxing units, who use it to set their tax rates to get them the money they need for their budgets in time for their budget years to begin Oct. 1.

“The only way they can fix this,” Cedars said of the possibility of redoing 2017 appraisals, “is by the time I reappraise, they’d have to give refunds.”

“It was more a matter of not increasing our tax rate,” County Commissioner John Gothia said of the county’s reduction of the 2017 tax rate by 2/10ths of a penny. “We have to keep the county operating.”

Only two of the nine cities, schools or county governments located east of the Cow Bayou’s intersection at I-10 raised tax rates. Four lowered tax rates slightly and three kept their rates the same.

Cedars explains that even if he was ordered to reappraise property for 2017, it wouldn’t necessarily lower taxes.

“If I cut values in half, will taxes go down?” he said. “They wouldn’t go down. [For the governments] to get back to the amount of money they need, they’d have to increase their tax rate.

So the relief Cedars offers for 2018, for those requesting assistance and documenting remaining damages, is 2018 appraisals would be lowered on a prorated basis for the number of months the house was unoccupied.

Gothia, from Bridge City, recalls that in 2009, the year after Hurricane Ike, his home’s tax value was reduced by half for eight months, the amount of time he was out of his house during repairs.

“The December letter will request all of the damage as of January 1 [2018] -- any damage on their home that‘s still being repaired,” Cedars said.

“Any kind of documentation -- which they need to do anyway for FEMA or insurance companies -- will help you. It’s not mandatory, but it’d be a great deal if they’d walk in our office and say, ‘Here’s the damage still on our house.’

“We won’t be able to do anything about anything they’ve already repaired.”

At a recent Orange County budget hearing, taxpayers upset about expected tax hikes were told to blame it on the appraisal district which sets the tax values.

Commissioners Gothia and Barry Burton advocated for a bill put forth by State Rep. Dade Phelan calling for direct election of the five members of the county appraisal board.

Never minding that commissioners, city council and school board members who are elected by taxpayers, are the ones who currently select the appraisal board members;

Cedars says that, by law, board members’ only duties are setting the office budget, appointing the five-member appraisal review board and hiring, firing or reappointing the chief appraiser.

“They have no say as far as appraisal values and you don’t want them to,” Cedars said of the board members. “It’s against the law for them to even talk to me about values, unless it’s in a public meeting.”

Cedars says his office is audited annually by the state and property values must be within 5 percent of market value.

“The review board members, they don’t answer to anyone,” he said. “They do not rubber stamp this office. I’d say they rule in favor of the taxpayer 60 percent of the time.”

Cedars said 2017 was the first time in seven years “we’ve seen a significant increase in values,” and he expects that increases will return in the near future. 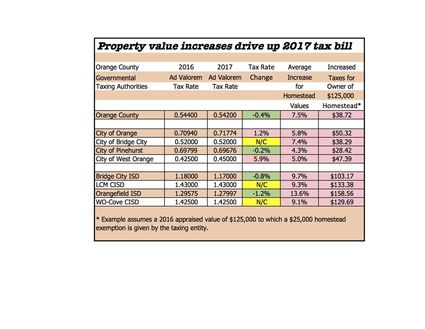 “We literally saw large increases the year following Ike,” he said. “The the reason we saw them is because sales started taking place. Some of the houses sold unrepaired, but the ones that were repaired were in much better condition and commanded better prices.”

Homestead values went up 13.6 percent in Orangefield and more than nine percent in the other school districts. Those values, even with mostly lowered or flat tax rates, cause the taxes on a $125,000 home with a homestead exemption to rise anywhere from $38.72 for county taxes, to $50.32 for City of Orange taxes to $158.56 for a home in the Orangefield ISD.