Randy Higgs’ truck, left, was joined by another one nearly in the same spot off FM 1442 sometime on the night of Aug. 29-30. (Photo courtesy Ron Huebel)

When Ron Huebel woke up Tuesday, Aug. 29, his plans were to ride out Tropical Storm Harvey in the safety of his own home.

But God, he believes, had other plans.

Before the day was over, he and son Chris Huebel had plucked plant worker Randy Higgs of Mississippi from his sinking pickup truck just as it filled with water and went to the bottom of a flooded drainage ditch south of Cow Bayou on FM 1442.

“I think God’s hands were in it,” Ron Huebel said. “I don’t know how else to explain it.”

The elder Huebel’s job takes him into many of Jefferson and Orange County’s petrochemical plants.

“If you know anything about safety, it takes a chain of events to have an accident,” he said. “This was kind of the opposite: There were so many things that should’ve or could’ve gone wrong that day that didn’t.

“I call it kind of a miracle.”

Higgs, a veteran millwright, was working a turnaround in Port Arthur until the storm that dumped more than 26 inches of rain on Aug. 29 (and more than 60 inches on Orange County in five days) forced the bosses to shut down the jobsite and order a one-week break.

He was heading home to Mississippi in his Dodge pickup, taking FM 1442 north from Bridge City to Interstate 10.

He made it to a sweeping curve just south of Cow Bayou.

“I was doing about 30 miles per hour and, all of a sudden, I started pushing water. I said, ‘Aw, shoot,’ and I slowed down,” Higgs said.

“I saw the left (southbound) side of the highway was higher than where I was, but I couldn’t get over because of traffic.

“Then a big truck, coming down the other lane, going too fast, sent a bunch of waves at me. I think those waves are what caught me and pushed me to the side.”

The bottom literally fell out for Higgs.

“The left end of the truck was lifted up and I was floated,” he said. “It was very scary. It really was. I’d never been in that situation.”

That’s about the time Ron Huebel rolled up after what had already been an adventurous day.

He and his wife DeLana, confident their house wouldn’t flood – spoiler alert: it didn’t, had invited two other families, including their son’s, to stay with them. Together, they would ride out the worst that Harvey could bring.

But before their day got good and rolling, an ambulance call across the street altered plans.

An elderly neighbor had to be hospitalized in Beaumont early that morning. That led the Huebels to volunteer twice to go out in the worst of the storm and ferry the neighbor’s family members to Beaumont and back from their Orangefield home.

“It was already raining so hard, I didn’t get over 50 [mph] on my way to Baptist,” Ron Huebel said.

“My wife and I came home around 2 p.m. By then, 1442 already had water over it for a fairly wide stretch. It kept raining and raining.”

Chris Huebel, his wife and daughter, and a third family had joined Ron and DeLana Huebel for dinner. Then Ron got called out again.

“It was getting close to dark,” Ron Huebel said.

The call was from the neighbor’s family. The sedan bringing everyone home from the hospital made it OK on the interstate from Beaumont to Orange but was no match for the high water on FM 1442.

“I wasn’t sure what to do,” Huebel said. “I knew the roads were bad but I couldn’t see leaving them there.”

Chris Huebel accompanied his dad this time. The Huebels’ 4-wheel drive truck chugged through high water most of the way from south of FM 105 to the rendezvous at the Crawdad’s store at I-10 and FM 1442.

They picked up their neighbor – she was discharged by the hospital – and two of her family members and headed back south.

“On the other (north) side of the Cow Bayou bridge, there was a 150-foot stretch of water and it was moving,” Ron said. “I had Chris looking through the window at the stripes on the road to make sure we stayed on the road.

“We went through it slow. It was raining pretty hard and you could tell the water was coming up.”

After the Cow Bayou bridge, next was the steep banked curve that normally crossed the drainage ditch.

Except this time, it was the other way around.

The fast-moving waters from the ditch crossed the roadway.

“As we’re coming up to that thing, we look off to our left and see tail lights. There shouldn’t be anything over there, but we saw tail lights,” Huebel said.

“That’s all we could see. Everything below the tail lights was already under water. And all of a sudden, we saw a dome light.

“That’s when we knew there was someone in there.”

As the elder Huebel dialed 9-1-1 to ask for assistance, Chris Huebel shot out of the passenger seat toward Higgs’ truck. He waded the first few steps, then had to swim for it.

“I didn’t think there was time,” said the younger Huebel.

“It was just a race against time. His truck was halfway submerged.”

Ron Huebel was talking to the 9-1-1 operator.

“As I was trying to tell 9-1-1 we needed a high-water rescue,” he said, “Chris is pulling this guy up out of the truck.”

Ron Huebel next got a vision he won’t soon forget.

“As soon as I got the guy out of the vehicle,” Chris Huebel said, “it was like something in a movie – it sank. The whole truck was gone.”

Next was a horrible noise.

“They’re hollering ‘Help! Help!’” Ron Huebel said. “The water was heading their direction, and they were trying to swim against it.”

“He was pulling me down. I thought I was going to have to let him go,” Chris Huebel said.

The elder Huebel swam in to assist his son and the stranger.

“He pulled us to the other side of the ditch, to where I could hold on,” Chris Huebel said.

From his Port Arthur motel room, Higgs said Monday he has had a rough time since that night.

Without transportation or a cell phone or computer, which were also ruined by the water, it took a while to get his life back on track.

One problem has been the lack of an accident report to give his insurance company. Paperwork gets lowest priority during times of disaster.

For more than a month, Higgs’ truck sat unattended not far from where it went under Aug. 29.

But he hopes to find long-term employment in Southeast Texas.

“There’s a lot of work in this area,” Higgs said.

Ron and Chris Huebel admitted earlier this week that they haven’t spoken much about that night since it happened.

“It’s just one of those things that happened. We were in the right place at the right time,” said Chris Huebel, a lab worker at a petrochemical plant.

Karen Dubose, the neighbor whose trip to the hospital led the Huebels to be at the right place at the right time, had a back seat view of the rescue.

“It was really dramatic,” she said. “They really put themselves at risk.

“That little truck was coming at us, and all of a sudden, it slipped over the side.

“You could hear the man in there screaming. My neighbor and his son jumped over the side and they grabbed him and threw him in their truck.”

“Chris, he didn’t hesitate. To me, he’s the hero of the story. If he hadn’t gotten to that truck, I don’t think there’s any doubt that man [Higgs] wouldn’t have made it.”

“My day went from thinking I was going to hang out at home and have a nice quiet day,” he said. “It ended up anything but that.

“To me, it was all just surreal.

“To think if we hadn’t decided to go get them [Dubose’s family], would we have been there? No. 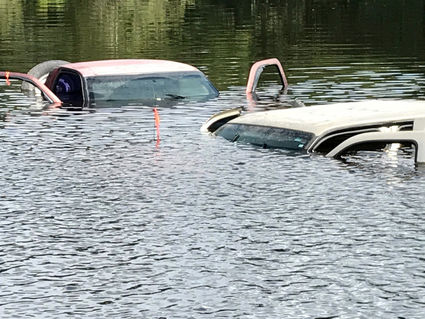 “If she hadn’t had to go to the hospital in the morning would that have happened? No.

“I’ve been through a number of hurricanes, but never anything that personal, something like that.

“I don’t know that it’s not anything a lot of people wouldn’t have done, given the circumstances. But at the end of the day, all I could think was ‘Wow, did all that just happen?’