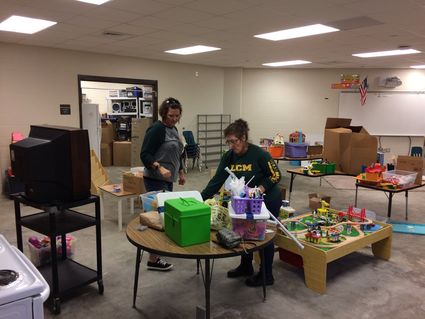 Last week, for the third time since August, the Mauriceville Elementary School teacher set up her kindergarten classroom.

It was in a Little Cypress Junior High classroom with only three solid walls.

“They’re going to remember this,” she said of her 18 students. “Nobody else ever had a kindergarten year like this.”

It’s been one for the ages for everybody in Orange County this fall, after Tropical Storm Harvey dumped record rains Aug. 26-30 and caused unprecedented flooding throughout Southeast Texas.

With four of six campuses suffering flood damage and needing remediation, everyone had been on a half-day schedule since they returned to school in late September.

Johnson and her students had been housed at North Orange Baptist Church until this week.

Little Cypress Elementary students in Pre-K through second grade are still at the church, while LCE third-graders remain at Little Cypress Intermediate, which along with the high school, didn’t flood.

The district’s sixth- through 12th-grade students are attending LCM High School on split shifts. The district is seeking portable buildings to fill out the year in Mauriceville, where floodwaters at Mauriceville Elementary and Mauriceville Junior High were 3 to 4 feet deep.

As teachers moved in last week, a group of administrators ruefully noted that the district had just last year finished a big renovation as part of a still-unfinished $56 million district bond project.

The district OK’d the final payment on the school at a recent meeting.

But the school was lucky, relatively. It only got 6 inches or so of flooding.

Most classrooms featured three walls made of cinder block and one of sheetrock. The bottom half of those sheetrock walls were ripped out and are now being covered by waterproof plastic.

The building has no floors. Only one of its two gyms is available for use.

And there’s the size issue. Everything was built for bigger students. Steps are needed to reach the water fountains.

“It’s huge, but it works for us,” Carie Broussard, Mauriceville Elementary principal said.

That said, Mauriceville Elementary has more students and a bigger staff than Little Cypress Junior High.

“We’re using all the space we have,” Broussard said. “The band halls are going to be classrooms.”

A supply closet has been converted into a classroom while a pre-kindergarten class is in the life skills (once upon a time called “home ec”) classroom, complete with a full kitchen.