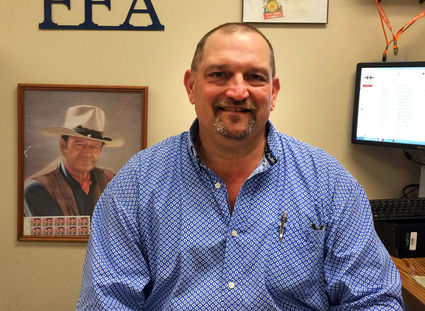 Life is full of twists and turns, but it will be a perfect circle when Chad Jenkins takes over as Justice of the Peace for Precinct 2 next year.

The Orangefield High School ag teacher will get what he says is his dream job by replacing the man who gave him his first job, Derry Dunn.

Dunn was principal at Mauriceville Middle School when Jenkins was a student. Then Dunn, as Little Cypress-Mauriceville principal, hired Jenkins a decade later.

“Of course, I look up to him. I definitely look up to Judge Dunn,” Jenkins said of Dunn. “He’s very people oriented. He’s been good for the county and the precinct.”

Jenkins swears there was no succession plan in place with his old mentor. It just happened the 72-year-old Dunn decided to call it quits by not running for re-election about the same time Jenkins was looking for a new challenge.

Jenkins was the only one to file for the JP2 office, meaning he’ll sit out both the GOP primary in March and November’s general election, advancing in a walkover.

“We’re blessed that we didn’t get an opponent on either side of the ticket,” Jenkins said.

So why did he decide to run?

“To be able to help people,” Jenkins said.

He recalled when he added the title of truancy prevention officer to his duties for OFISD several years ago.

“I just want to make a difference, to help people in Precinct 2 and Orange County in general. The key thing is going to be helping people.”

Like Dunn, Jenkins and his family live on a family farm in Mauriceville. His mother’s family, the Brewers, came to the area in the 1850s, Jenkins said.

As a youngster, he participated in 4-H and FFA, formerly known as the Future Farmers of America. He showed everything from chickens to steers.

He went to college at Sam Houston State, where he was president of that school’s FFA chapter. He was on the livestock judging team.

Jenkins proposed to his wife Windee at the Beaumont Swine Show.

It was part of the South Texas State Fair and Windee, another teacher at Orangefield, was helping him chaperone the students that were participating.

He bought his engagement ring that night from a Heartfield’s Jewelry booth at the fair.

Windee, who was more into sports than saddles when she attended LC-M, has since teamed up with Chad for three sons.

Tanner, 21, is on the rodeo team at Northeast Texas Community College in Mount Pleasant. Tyler, 20, is studying agricultural education at Tarleton State in Weatherford. Trever, 15, is a ninth-grader at Orangefield. He shows heifers.

Jenkins has 350 students go through his ag building every day, he said. About half of those participate by raising and showing animals or by judging or other leadership activities.

While annual overnight trips to livestock shows in Fort Worth, San Antonio, Houston and Beaumont get most of the attention, Jenkins and his youngsters prepare for those by showing in one-day prospect shows nearly year-round.

“I’ve been very blessed and fortunate to have good kids all the way through,” he said.

Jenkins plans to stay at Orangefield High through the end of 2017 before jumping to his new job on New Year’s.

He knows there are 80 hours of education he’ll be required to get once the November election becomes final, but he doesn’t expect a huge transition.

“Of course, you have guidelines you have to follow but common sense comes into play also,” Jenkins said. “And from seeing what Judge Dunn and others have done, it’s just great to be able to affect people’s lives and help them get on the right path.”