Dean Crooks came out of the gate as the top spender and Robert Viator took in the most contributions, according to the first set of campaign finance reports filed for the 2018 Orange County elections.

Crooks, a first-time office-seeker set for a March 6 showdown with County Judge Stephen Brent Carlton in the Republican Party primary election, listed $4,907 in expenses on report filed with the County Elections Administrator that tracked activity through Dec. 31.

Theresa Adams Beauchamp and Viator, each of whom are challenging incumbent county commissioners, were next, spending $3,354 and $3,165, respectively.

Many of the county’s candidates are self-funding their campaigns, so far, and that includes Beauchamp, who is running against incumbent Barry Burton in the Precinct 2 Commissioner race.

She spent $750 on her filing fee, then the rest on advertising -- $2,286 to the GOP Store in Huntsville, $103 to Bridge City’s Central Office Supply and $53 to Mellybeth Designs of Orange.

Viator, who is looking to unseat two-term incumbent Jody Crump in Precinct 4, reported a total of $8,621 in contributions with $5,400 of that coming in personal loans by Viator.

Top donations included $1,000 from Katherine B. Carroll of Vidor, $850 from campaign treasurer Bob Turner of Vidor, and $800 from Lakewood Partners, Ltd., of Rose City.

Viator listed only one expense, $3,165 to Capital One for printing expenses.

Carlton, listed total expenditures of $804, most of which was the filing fee of $750, against $854 in personal loans.

Burton listed $809 in expenditures, including the $750 filing fee. He showed a personal loan outstanding of $920 and reported contributions of $850, with $500 from Dale and Alana Peddy of Mauriceville; $200 from Helen Holmes of Orange; and $150 from Sheila Ware of Orange.

Crump listed no contributions and expenses of $912, split between the $750 filing fee and advertising signs from SAJE Signs & Graphics of Vidor. 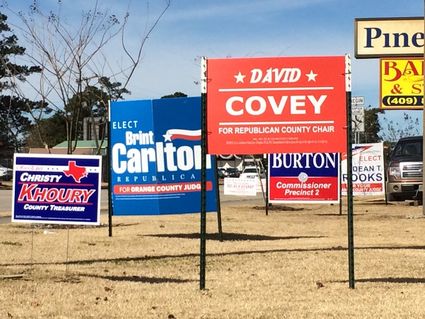 County Treasurer Christy Khoury is the other county incumbent facing a primary challenge. Her only entry was a $750 expense for the filing fee, paid from personal funds.

Donald Brown, Democrat candidate for County Judge in the Nov. 6 general election, showed a $750 expenditure for the filing fee and a $750 personal loan to his campaign.

Monday, Feb. 5 is the deadline to register to vote in the March 6 GOP primary. Early voting runs from Feb. 20 to March 2.