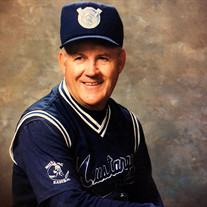 “Words cannot explain the impact this man has had on me personally in my coaching career,” read a Facebook post by Sam Moore, who played for Anderson and went on to coach baseball at both WOS and Bridge City.

“He instilled in us the true meaning of hard work and dedication. His attention to detail in the teaching of baseball is second to none. Nobody was better prepared for a game than his Mighty Mustangs.

“Later, I had coaches tell me they were five runs down after we took pregame.”

Besides baseball, Anderson loved deer hunting, fishing and golfing with his family and friends. He had been living in Broussard, Louisiana, with his son Ryke and daughter-in-law Gina.

Funeral services will be held at 11 a.m. Saturday, Feb. 10 at Claybar Funeral Home in Orange. Burial will follow at Hillcrest Memorial Gardens in Orange.

Visitation will be held from 5 p.m. to 9 p.m. Friday, Feb. 9 at Claybar Funeral Home in Orange.

“I learned so much about coaching young athletes from him,” Steve McCarty, the first athletic director at WOS, said of Anderson. “I have great memories of a great coach and man.”

The Mustangs’ diamond was renamed Ronnie Anderson Park years ago.

“What a coach and an even better guy,” commented Shea Landry, another former WOS head baseball coach. “When you hear WOS baseball, you automatically think of him.

“And it was always a pleasure to see him at the park. I saw many people come up and talk with him.”

Anderson didn’t have to be on a baseball field to get noticed around Orange.

“The greatest joy one has as an educator is when former students come by and visit,” Butch Campbell of Lamar State-Orange said. “Coach Anderson always had a waiting line when you saw him out.”

Anderson was a taskmaster who expected his players to master their tasks. But he routinely followed his high-pitched performance-enhancing hollering across the diamond by taking the player under his arm and quietly reminding him how to perform correctly.

“He was funny,” Martin J. Trevino posted. “But people imitated him with respect.”

Terry Huckaby called him: “A mess and a character as well.”

“Coach had one rule: Do right,” Tony Dallas recalled. “I didn’t always succeed at that but it meant enough to me that I’ve used it with my kids, too.

“There aren’t words that can explain what he meant.”