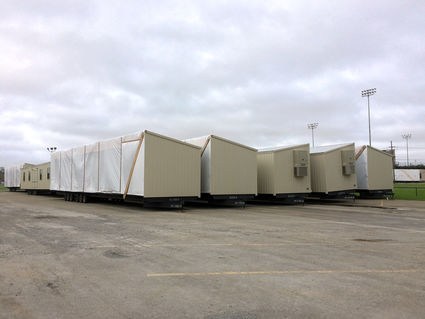 How long does it take temporary classroom buildings to become permanent eyesores?

There are 20 brand new ones that have sat for two months, unused, near an Orangefield elementary school that was nearly washed away by Hurricane Harvey at the end of August.

Who could blame folks in the community from doing a slow burn as they pass the shiny trailers twice a day on their way to drop off and collect their kids from seriously overcrowded school houses?

“This project was scheduled to have been done on Dec. 30. Then it got pushed to Jan. 25,” Stephen Patterson, Orangefield schools superintendent, said of repairs to both the Elementary and High School campuses, damaged severely by the worst rainfall event in United States history.

“The weather hasn’t exactly cooperated,” Patterson noted. “We actually have a meeting Friday, where we’ll be finalizing the reconstruction for the interior of the buildings at the elementary and the high school where the flood damage was.”

Orangefield’s Junior High was the only one of the district’s three campus spared Harvey’s high waters. After the storm delayed the opening of the OISD school year until late September, elementary students have been going to class at the Junior High.

Junior high students have been sharing a building with high schoolers at the High School. Administrators and teachers are using every available space for classes, including gyms and cafeterias.

“Where we are right now is we need these portables put in so we can get at least some of the elementary population back on campus. That (Elementary School) building is still closed at this point.”

The portable buildings waiting to be hooked up are packed five wide on the elementary school parking lot. Four others in front of McLain Stadium will be put together to form one large building that will serve the Orangefield High Theater Department. Patterson said the high school library has taken over the theater classroom.

“We need to portables, so we can essentially unpack,” Patterson said. “That job should have been completed a month ago. Now we’re probably still a month or more out.

“We need to get kids out of band halls, get them out of gymnasiums where they’re currently having classes. Get them back in real classrooms, even if it’s not back on their own campus. Just a little bit of movement could do volumes for us.”

The contractor in charge of installing the portable buildings hasn’t met Orangefield’s needs.

“Our biggest issue right now is the contractor that was hired by the Army Corps of Engineers has been difficult to work with,” Patterson said. “That timeframe has not proceeded at the rate that we expected it to. And the Corps is doing their best to help us resolve that matter.

Tough is the way the people of Orangefield have responded to their school’s struggles.

“The high school campus right now has about 1,100 kids on it, and that campus was designed for probably 550,” Patterson said. “The junior high is designed for about 550 kids and it’s got 742 elementary children in it.

“So we’re having to be very creative about how we’re utilizing the space.”

To top it off, Orangefield after Hurricane Harvey, is having a record attendance year, the most ever.

“That’s the thing that sometimes get missed, that in spite of all of this, we have more kids on campus today than we’ve ever had in the history of the district,” the superintendent said.

“We were looking for the mid-1700s and we’re 1,805, so we’re 55 kids more than what we thought we would be. That’s a good problem to have. And we like that people want to be here and it’s growing, but we’ve got to get some classrooms put together so it’s better for the children.”