Photo: Ricky Bodin, Chief of the Bridge City Volunteer Fire Department, stands in front of the Central Station on Bland Street. The department is celebrating its 65th anniversary at its annual banquet April 21.

The Orangefield Fire Department at 9450 FM 105 is part of Emergency Services District No. 2, also known as the Bridge City Volunteer Fire Department.

From the most humble beginnings, two trucks and 15 volunteers in 1953, the Bridge City Volunteer Fire Department has grown by leaps and bounds.

“It really takes a lot of dedication to put in the training, take time to respond to incidents and still have time for family,” Bodin said.

“But people who have the want-to to help their neighbors, that’s what they do.”

The 65th anniversary of the chartering of the Fire Department is Thursday, March 22, with its annual banquet set for Saturday, April 21 at the Central Station, 330 Bland.

“It’s a good time to get together and celebrate the accomplishments during the year,” explained Bodin, a Bridge City native whose full-time job is as a firefighter for the City of Port Arthur.

He is a part-time employee for the Bridge City department. Four dispatchers work full-time and dispatch calls not only for Bridge City (Emergency Service District 2), but for ESD 1 (Vidor) and ESD 3 (Mauriceville).

Bodin says five of Bridge City’s volunteers work full-time for other area departments – Beaumont, Port Arthur and Baytown – and choose to give back to their hometown by volunteering.

“Really and truly, a volunteer firefighter is an individual that wants to be involved in their community and wants to help fellow citizens and has found this is how they do it,” Bodin said.

The department holds training sessions each Thursday with the goal of getting every volunteer certified by the State Firemen and Fire Marshals Association.

Nearly 20 percent of the BC volunteers are members of the Junior Firefighters program for teenagers 16 and up.

“It gives young people ways to serve,” Bodin said. “A lot of our Junior Firefighters have gone on to public service as a career, firefighters, EMS, law enforcement.”

“We run what we call a first responder organization,” Bodin said. “On serious medical calls we run in conjunction with Acadian Ambulance Service. The majority of runs we have are EMT runs.”

The Bridge City VFD responds to more than 1,500 calls per year, Bodin said.

“In this area, 88 percent of our runs are EMS, like MVAs (motor vehicle accidents). Another 10 percent are trash fires,” the chief said.

“We probably average maybe 15 structure fires a year. Last year, we had more than that because of hurricanes.”

Hurricanes Ike and Harvey are “the biggest incidents we’ve been involved in,” Bodin said.

“Around the county, we’ve had serious fires. Those are mostly in other districts where we run mutual aid.” 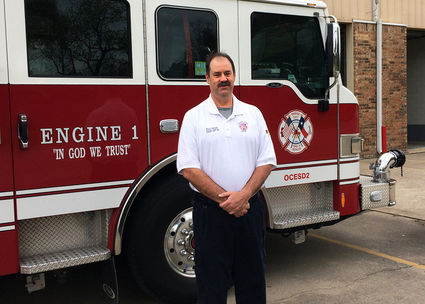 The trucks respond from either the Central Station on Bland Street or the Orangefield Fire Station, 9540 FM 105.

The department’s first station was on Texas 87. It moved into the Bland Street location in 1981.

The first fire engine was a 1929 Chevrolet once used by Pure Oil Company in Port Neches.

The BCVFD was chartered in 1953, nearly two decades before Bridge City was incorporated in 1970. The first official chief was Archie Calhoun, according to Record archives.