He said that was so because the state of Texas has a larger economy than the entire country of Russia.

“That makes me more powerful than Putin. And I can tell you for a fact that I had more to do with putting Donald Trump in office than Putin,” he declared.

That remark drew a roaring applause from the more than 300 folks who attended the Orange County GOP’s first Lincoln-Reagan Dinner fundraiser at the County Expo Building on FM 1442.

Cimron Campbell, the first Republican elected to county office in decades when he won a justice of the peace election in 1998, won the Chairman’s Legacy Award.

The topic of the evening, at least for those visiting from out-of-town, was Hurricane Harvey, which as Babin said gave him “the dubious honor of having the North American rainfall record in my district.”

“Most of us lived in hip boots for days on end,” he said.

The politicians praised Orange Countians for their hardiness in responding to Harvey and for coming to the aid of their neighbors.

Gov. Abbott said he brought “thanks for local officials and their tireless efforts.

While the recovery from Harvey drags on as funds work their way through state and federal bureaucracy, the governor bragged of “money now” to help correct drainage problems and protect the area from future flooding from hurricanes and storms.

“For the first time, there has been funding of $3.2 billion for the coastal spine of Texas. We have money available now to write checks for flood mitigation projects.”

But then he declared Texas Senate District 3, which runs up from Orange County past Nichols’ home office in Jacksonville, “the most Republican district in Texas,” based on a 78 percent vote for Donald Trump in 2016.

“You have to go all the way out to West Texas to find districts with 77 and 76 percent for Trump,” he said.

Phelan noted that many of Texas’ larger cities had voted “blue” for Democrats in 2016 and again in the recent primary.

“Some of my fellow lawmakers in the big cities woke up the day after their elections to a blue wave,” he said.

“If there was a blue wave in Orange County, it was lost in a sea of red.”

While Babin mentioned that while Trump “may be unorthodox,” he noted that according to the Heritage Foundation, Trump is the most conservative president in American history.

The governor made a blue state-red state joke based on Trump’s call for a border wall between the United States and Mexico.

“I worry all the time, ‘Is Texas going to be hijacked by people from California?’”

Covey, the county GOP chair, introduced Babin to the podium by recalling how the Woodville resident and his wife had brought a trailer of relief supplies into Orange County in the immediate aftermath of Harvey.

Babin talked about his lobbying his fellow Congress members for aid to Texas after Harvey. Phelan noted the governor also has made several trips to Washington to focus attention on the state’s needs.

Said Babin: “While most of the nation was focusing on Houston, I told my colleagues in congress, ‘Don’t forget about East Texas.

“My colleagues in Congress appropriated more than $100 billion in recovery efforts, the largest share of which will be going to Texas. Many of those decisions of how the state disburses these funds is up to some of those here in this room.

“And to everyone in this room I’d like to say that the fact that Gov. Abbott is here this evening is a public statement to all of us that Orange County will not be forgotten.”

Abbott says that in his travels outside the state, he hears Texans complimented often.

“As I travel the country, people recognize me from those early days of the storm,” the governor said, “and they say, ‘Could you please tell the people of Texas we admire them for how they responded to Hurricane Harvey?’

“What happened not only changed lives, it changed hearts and souls.” 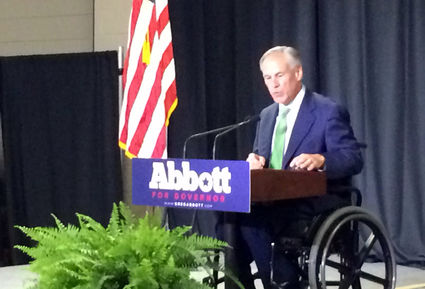 A youth choir helped open the evening by singing the National Anthem.

A couple of hours late, the governor was still impressed.

“There was not a single person here tonight that took a knee during the National Anthem,” Abbott said.

“That’s what America is about.”