For a living tribute to a life-changing pioneer, Orange’s Brown Hearing Center has few peers.

The family business started by Lee and Dorothy Brown in 1962 has expanded to eight offices and 100-plus service centers in Texas and Louisiana.

Last year, its in-house graphics department sent out more than 2 million direct-mail advertising pieces and its specialists tested and fitted more than 3,000 patients with hearing aids.

“When Dad got into the hearing aid business, he knew nothing about it,” recalls Karlene Toohey, his daughter and one of three second-generation owners.

“He was a salesman of all different things. And then, after starting the business in Palacios, south of Houston, he bought a practice in Orange from a doctor and moved us all here.

“The rest is history.”

Along with Dorothy Brown, Toohey runs the business with husband Eddie and brother Dave Brown. Karlene and Eddie’s sons Daniel, Casey, Matthew and Eddie are also active in the business.

Which is pretty amazing, according to statistics that show that only 70 percent of all businesses survive to be passed on to a second generation.

Of those, only 10 percent reach the third generation.

“My dad started this 56 years ago,” Toohey said. “He set up the legacy. We feel a responsibility to make the business successful.

“Success means helping people. That’s what my daddy was all about.”

“We’ve put a lot of people in the hearing aid business,” Karlene Toohey said, speaking of family members who learned from Lee Brown.

“There are other sisters and brothers-in-law that started off with us and have gone in other directions. Most of the other hearing aid dealers in town started with us.”

The need for improved hearing hasn’t gone away.

“When I first started about 30 years ago, 8 or 9 percent of people had hearing loss,” Toohey said. “Now, it’s 12 percent. That 12 percent equals about 38 million people in the United States.

“The sad thing is only about 75 percent of those are wearing hearing aids. So that’s our challenge: to motivate people to get help with their hearing and overcome barriers.”

Service centers are temporary, remote locations such as a senior citizen center or a chamber of commerce office. The remote locations range from Rockport on the Gulf Coast to Central Texas to Jacksonville in northeast Texas to the western part of Louisiana.

“We visit each one about every six to eight weeks and provide testing and custom fitting,” Toohey said.

“The main thing about a hearing aid is not just the hearing aid; it’s the service and follow up that goes with it. Follow up and service is critical to our success.”

“The digital technology has become so advanced, we can buy them for less than we could make them,” Toohey said. “So we moved our lab employees into different departments and didn’t lose many employees.”

The customer service operation for the entire company is based in Orange, as is the advertising and printing. 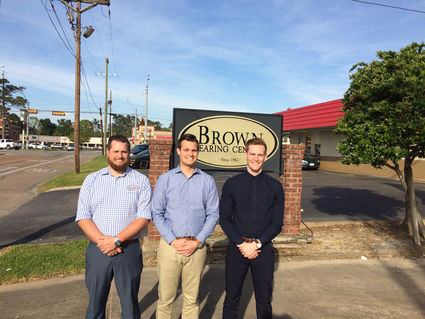 “Everything funnels through here,” Toohey said. “That’s how we’re able to maintain consistent quality. We really focus on taking care of our customers.”

With the price competition offered by large big-box retailers, attention to detail is key.

“We focus on providing service,” Toohey said. “If you’re going to a big-box, you’re focused on getting the best price. We have to work harder.

“We have to provide top-notch service.”