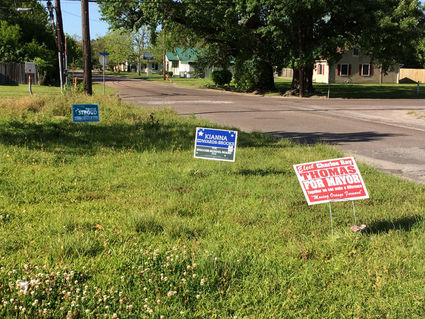 Early voting begins Monday and runs through May 1 for those cities and school districts conducting 2018 elections.

Most area officeholders are running unopposed but an Orange mayor’s race and two West Orange-Cove school board seats are up for grabs as are a school board seat and a city council seat in Bridge City and two spots on the Orange County Navigation and Port District board.

The city of West Orange canceled its regular election as did Pinehurst and Little Cypress Mauriceville CISD because no elected office drew more than one candidates.

But West Orange is having a special election to decide five issues.

The formal election day is May 5 but early voting has come to be equally, if not more, important because of its ease.

Larry Spears, Jr. and Charles Ray Thomas are facing off in Orange to fill the mayor’s chair. Spears won his second term as At Large Place 6 council member a year ago, but yielded that seat to run for the mayor’s job previously held by Jimmy Sims, who is retiring.

In the WOCCISD election, incumbent Roderick Robertson and Kianna Edwards-Brooks and Tricia Stroud are running for two at-large spots, with the top two vote-getters elected.

In the city of Bridge City election, Joseph Hannon is taking on incumbent Lucy Fields for Place 6.

The BCISD election will pit newcomers Patty Collins and Paul Zoch for the Place 2 spot.

City of West Orange voters will vote on whether to reauthorize a one-quarter of one percent sales and use tax for street repairs. It will also address four suggested charter changes.