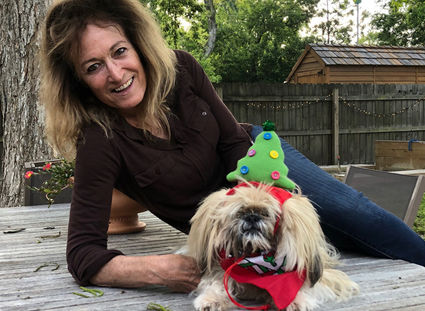 Photo: Gina Rebich helps Koda prepare for the Gnarliest Dog event as part of the Doggie Contests being held at Depot Day 2018, a May 12 fundraiser for the Orange Train Depot Museum.

So if your best friend howls at your jokes, loves to have their belly scratched and likes to dress up, the Orange Train Depot is the place to be for Depot Day 2018, Saturday, May 12.

Depot Day, a fundraiser for the Friends of the Orange Depot, runs from noon to 5 p.m. at the historic Orange landmark, 1210 Green Ave.

“We’re trying to do something that’s fun and light-hearted and will get people out with their pets for the day,” says Gina Rebich, co-chairman along with Alicia Booker.

Yes, they will have a kissing booth for dogs and their best friends.

“We’re going to have a contest for the owner and dog that look most alike,” Rebich said.

Entry forms for the doggie contests can be found at orangetxdepot.org.

Sadly, the event is limited to dogs 20 pounds and smaller.

“The reason we’re only doing small dogs is it’s our first time and don’t know what we’re liable to run into,” Rebich said.

“Sometimes you can run into trouble when you mix big dogs and small dogs. You don’t want a Great Dane running over a Chihuahua.”

Doggie contests are just some of the fun events scheduled for the event, which is raising money to better outfit the museum portion of the depot project, which opened to the public a year ago.

There will be a trackless train, a photo booth, face painting, balloon sculpting and various food vendors on site. Entertainment will be furnished by Chris Bergeron and County Line Folk Dancing, along with choirs from local high schools.

Raffle items include a weekend retreat at La Maison d’Orange, a new bed-and-breakfast opened by Rebich at 901 W. 10th Street; boys’ and girls’ bicycles’ an RCA tablet; a Kendra Scott necklace; Bluetooth portable speaker; a cross and a City of Orange throw blanket.

Plans for restoration of the depot, a multi-million-dollar project led by Orange native Carrie Woliver, called for opening the building for meetings and events, which has been accomplished.

The acquisition and display of Orange historical items tracking the town’s history as a timber empire, shipbuilding mecca and a chemical plant pioneer, is taking longer.

Rebich worked in Orange for an oil company a decade ago but only recently moved back to town after living in west Texas.

“The train depot was such an eyesore,” she recalled. “Everyone always felt sad and regretful that it was deteriorating like it was.

“Carrie Woliver decided to get excited and put energy into it, and its restoration. She just stayed with it, raised some money and did all the things you have to do to make it happen.

“She had a love for Orange, this community and made it happen. We’re really proud of her. She just kept dreaming and believing. That’s what you do when you have a project like that.

“Now when you sit and wait for a train, it makes you feel good.”