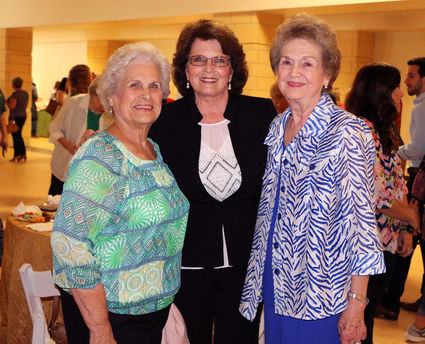 Dr. Pauline Hargrove was honored by friends, family and many long time colleagues at her retirement reception on Monday, May 21. Pictured are LCM retirees, Sylvia Bland (left) and Anne Stelter (right) were there to honor their longtime friend who was also their colleague.

Fear is a powerful thing and Pauline Hargrove says it is making the world we live in far different from the one she grew up in during the 1960s.

“We look at all the tragic things going on in the world and it creates fear,” she said.

“And when people start reacting out of fear, it’s the knee-jerk reactions that causes them to do the things that they do that are harmful to mankind.”

After 44 years as a teacher, principal and school superintendent, Hargrove is stepping away from the leadership role at the Little Cypress-Mauriceville school district.

She was honored Monday with a retirement reception put on by the Board of Trustees, but says she isn’t going anywhere for a while.

The board’s plan is to choose a new superintendent by July. But Hargrove plans to stay on to assist her replacement through the end of 2018.

And, for sure, she’ll be around long after that – as a visitor and a volunteer.

“I will still have three grandchildren at LCM High School,” she said. “I love the district. I want to help the district by continuing to serve. I want to be an advocate for education and for kids.”

Hargrove’s upbringing as the youngest of R.E. “Dick” and Billie Colburn’s three children, stressed the importance of family, faith and education.

“I think we’ve got to get back to living by faith,” said the fourth-generation member of Orange’s historic First Presbyterian Church.

“I think we’re in a fear versus faith situation here.”

After graduating from Orange Stark High School, Hargrove followed older brothers Dickie and Jeep in obtaining an education degree, hers from Lamar.

She stepped away from teaching for a few years to raise daughters April and Jeannie but was called back to education.

“My mother and father instilled in us such a strong love and respect for education,” she said. “This world needs you to be educated and we have to be continuous learners.”

That’s why in a time when the Internet brings non-stop reporting that includes teacher strikes, school shootings, state and federal cuts to school funding and calls for school vouchers, Hargrove just leans in even more to her chosen profession.

“The role of teaching is paramount,” she says.

“People are more interested in doing what they want to do. But it’s important to question, important to do our own research, make up our own minds.

“It’s important to have people teach us how to do it.”

The LCM district addressed school safety as part of a $56 million bond approved by taxpayers in 2013 to update campuses and limit outside access.

“We were almost finished [with construction],” Hargrove said.

He said $20 million of that went to remediation contractors who “dried out” the buildings and removed flood-damaged floors and walls. Reconstruction will cost $10 million and the rest is for replacing contents.

The federal and state governments have said they will reimburse all or most of the Harvey expense. But no “Harvey funds” have reached area schools yet.

Even in her 44th year in education, Hargrove has learned and learned some more because of Harvey.

“Harvey did tremendous damage to our area and left many of us in dire straits,” she acknowledged.

“But at the same time, Harvey brought in new opportunities, new challenges to step up to the plate, to be the people God intended us to be, people reacting out of love, not fear.

“I can’t say enough about our people, except when the going gets tough, the tough get going.

“They all came together to make it a great school year.”

With four campuses out of use, the district came up with a plan to restart school by shifting to half-day classes, using every bit of available space and getting a big boost from the North Orange Baptist Church, which has been hosting elementary school students since October.

“We could not have done it without a multitude of people – those we knew and those we didn’t know – coming to our rescue,” Hargrove said.

Hargrove’s home was flooded. Like many of her teachers and students, she and husband Ricky are living in a travel trailer while home repairs continue.

The superintendent points out that despite all the distractions, LCM students have continued to win academic and athletic awards and do well on STAAR tests just as they have in more “normal” years.

“In spite of any hardship this district has suffered this year, it has been far outweighed by the fantastic achievements of our students, faculty and staff,” Hargrove said.

“And, by a tremendous outpouring of love.

“This is not how I anticipated my last year would be. This has been a phenomenal year.

“It has been an eye-opener filled with opportunity and challenges that have made us better people. I’d say God has given us grace to do whatever needs to be done. His love has been abounding.”