Night Ranger delivers the fun with night of rock 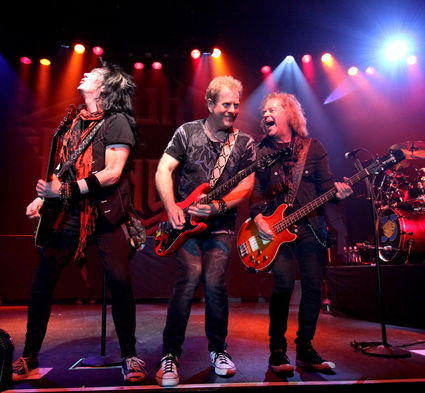 Night Ranger, celebrating over 35 years as a band, and featuring members, from left to right, Keri Kelli, Brad Gillis and Jack Blades, delivered an extremely entertaining 85-minute set of music at the Golden Nugget Casino in Lake Charles this past Saturday (June 2, 2018), which featured hit songs such as “Sister Christian,” “You Can Still Rock in America,” “Don’t Tell Me You Love Me” and “Sentimental Street,” as well as some rare gems and even Damn Yankees tunes “Coming of Age” and “High Enough.” More rock is on tap at the casino this Friday with Queensryche and Skid Row. Visit www.goldennuggetlc.com for the full schedule of music.

There is an obvious reason why California rockers Night Ranger are still recording and touring after more than 35 years as a band, and that is because it is fun for them.

Night Ranger rocked a near-capacity crowd for nearly 90 minutes this past Saturday night (June 2, 2018), at the Golden Nugget Casino in Lake Charles, La., but, throughout the night which included a setlist of hits, gems and pleasant surprises, it was evident the band was having fun on stage during its performance.

Whether they were trading punches on the shoulder, laughs while jamming out a classic tune or making small talk with the fans during the set, Night Ranger had fun and it was infectious to its faithful fans from Louisiana and those who traveled across the Sabine River from Texas.

Jack Blades remains a man made of pure energy as he is constantly in motion from the first note of the show to the last, while Kelly Keagy is still a beast on the drums. The vocals of both men remain spot on for their respective songs and arguably sound as good as they did on songs such as “When You Close Your Eyes” and “Sentimental Street” as they did over 30 years ago. Eric Levy’s backing vocals and work on the keyboards may go unappreciated by some but cannot be overlooked by true fans as he is the glue for many of the band’s hit songs and his smile during each performance clearly shows his enjoyment as well.

Brad Gillis fretwork on the guitar is nothing short of sensational and his reputation as one of the best to pick up the six-string is well deserved, while the work of guitarist Keri Kelli is not to be understated. Each of these men have played guitar with legendary vocalists for a reason, as Gillis played with Ozzy Osborne at one time and Kelli with Alice Cooper.

The band opened the show with the tune “Somehow Someway” from its March 2017 release, “Don’t Let Up,” which was a hard rocking track perfectly penned to set the tone for the night’s performance. From here on out the treated fans to a mix of classic hits, such as “Four in the Morning” and “Sister Christian,” or gems like the rarely heard songs “Passion Play” and “Night Ranger.”

Fans were also treated to a trio of hits from Blades other project from the 1990s, better known as Damn Yankees, which also featured well known musicians Ted Nugent and Tommy Shaw. It is not uncommon for fans to hear one such tune during each Night Ranger concert, but being treated to a trio of tunes – “Coming of Age,” the opening one-third of the song “Come Again” which segued into the full version of “High Enough” – is guaranteed to make any concert better.

If you have the opportunity to see Night Ranger in concert in the near future, then do yourself a favor and go. This band is arguably as good as it ever was and the quintet shows no signs of slowing down any time soon. And we can all be very thankful for that.