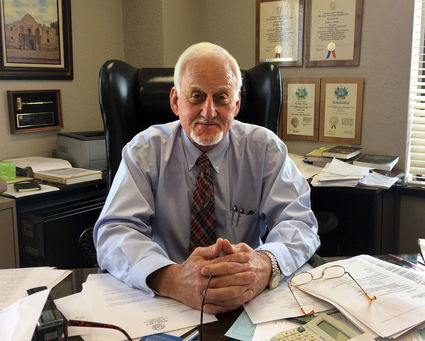 It’s been nearly a half century since law school buddy Grover Halliburton persuaded him to trade in the dust of south Texas for the Southern splendor of Orange, Texas.

But the memories from those 46 years come pouring out of Judge Buddie Hahn as if they happened yesterday.

Hahn, 74, who recently announced his plans to retire June 30 from the 260th District Court bench he was originally appointed to in 1982, remembers that he was a court-appointed lawyer for one of the men charged with the 1974 death of Orange Police Department Capt. Danny Gray.

Gray was shot and killed during a scuffle that broke out during a jailbreak. Both Billy Wayne Dowden and Clifford Bransett were charged with capital murder.

“I was representing a guy who was charged with capital murder and they were seeking the death penalty,” Hahn said.

“He [Bransett] was found guilty, but they gave him life in prison. They didn’t give him the death penalty.”

“Shortly after I was appointed judge, we had a capital murder trial in my court involving a young man, Bobby Joe Wills, shot and killed an attendant at a Simmons Drive convenience store.

“He was found guilty and was given the death penalty.”

More than a decade after the 1985 trial, Wills’ sentence was reduced to life in prison, where he died, Hahn said.

Over a three-year period from 1988 to 1991, Hahn presided over the first lawsuit brought by some of Lutcher Stark’s heirs against the Stark Foundation.

They maintained Lutcher Stark had schemed to hide assets from his first wife’s estate that his adopted sons should have inherited.

“They alleged he manipulated the inventory [of Nita Hill Stark] to basically nothing,” Hahn recalled. “They said he cheated his boys out of their inheritance.

“They ended up settling.”

The plaintiffs received $5 million in that case.

Two decades later, Stark heirs again sought a bigger piece of a family fortune in the hundreds of millions.

“I recused myself,” Hahn said, “and [visiting judge] Lee Duggan dismissed all claims.”

Duggan also ruled the plaintiffs should pay a half-million dollars in lawyers’ fees.

A year ago, Hahn sentenced Carl Jacob Broussard to 180 days in jail and 10 years probation after Broussard pleaded guilty to a hit-and-run accident that killed a mother and 6-year-old daughter as they crossed a dark roadway.

“There never was a charge on him by the police department in causing the death of those two people. It was just the fact that he left the scene.

“So that was a little controversial,” Hahn said.

“A lot of people wanted him to be sent away. If he’d have caused the deaths that would have been another thing. But you’ve just got to make your call and move on.”

Hahn says he got to know Halliburton, who would be Orange County Judge from 1971-76, when the two attended the University of Texas law school together.

“Everything was always alphabetized,” Hahn explained.

A native of Sanderson, in southwest Texas, near Del Rio, Hahn graduated UT Law in 1966 and joined a law firm in Beeville, in South Texas not far from Corpus Christi.

Halliburton went to work in Orange.

“I’d visit him in Orange; he’d come to Beeville. We were just the best of friends,” Hahn recalled.

Hahn said Orange County Attorney Louis Dugas offered him a job but he couldn’t take it because at the same time he was appointed Municipal Court Judge in Beeville with an impressive raise.

Finally in 1972, Hahn came to Orange, working in private practice in Vidor.

When Don Burgess filed to run for the Texas Court of Appeals, Hahn was appointed in 1984 to replace him on the 260th bench.

Starting in 1986, Hahn has won eight four-year terms to stay in the job. He never had an opponent.

But the state’s age limits did catch up. Texas won’t allow judges to be older than 74 when they start a term. Hahn turns 75 in December, too soon to start a new term Jan. 1, 2019.

“I wrote the governor a letter and told them I was retiring and I notified Steve Parkhurst, too,” Hahn said.

The decision on how to staff Hahn’s spot from July through December is one for Judge Olen Underwood of the Second Judicial Administrative District of Texas.

Parkhurst said he planned to pursue the early start, but said he had plenty of work to do closing out his law practice caseload.

“My wife Carol has a whole list of things she has in mind, and we’ll be doing some traveling. I’ll probably get back to playing golf,” Hahn said.

He said the best part of his job as district judge was handling adoptions.

Child custody cases, he said, are the worst.

“Murder cases get the publicity, but child custody cases are the toughest. Those are where you’re directly affecting the families,” he said.

While he plans for more family time, Hahn says he will continue to try cases as a visiting judge.

He won’t go back to a law practice, though.

“I’ve practiced enough,” he said. “I’m through with that.”