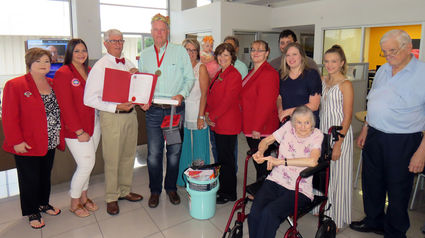 David Ess was born in West Virginia to Dwayne and the late Betty Ess.

In 1990 David married the love is life Lori and they have two daughters, K’Lynn Borg age 26 and Kember Ess age 14.

The light of David’s life is his granddaughter Eastynn Borg who just turned 1 in May. He was nominated by daughter’s K’Lynn and Kember who’s nomination, in part, read “Our Father has always stuck with us, with his held high and his eyes on God, and as a family we are honestly so fortunate to have in him our lives.” In 1999, David was diagnosed with melanoma, the doctors gave him only six months to live.

Being the fighter that he is, he beat the odds and four years later hasn’t had any problems or reoccurrences leaving the doctors in awe.

He is currently in a commercial that began airing in May for MD Anderson.

David is not only a dedicated family man who is called “My Family’s Rock” by daughters K’Lynn and Kember, but he also cares about his fellow man.

Each year Ess sponsors the Bridge City High School Strutters golf tournament which is named after him.

He is also active in supporting the local 4-H program and Girls Haven as well as donating to several other charities.

After receiving his award, Ess said, “I hope I am an example to everyone.

It is so simple to do something nice for somebody else when you can.

My wife and I have a little saying that God will give you a sign and it’s pretty simple, just open you’re your eyes and you’ll have plenty of opportunities and it will come back to you tenfold.” In his spare time, David enjoys golf, relaxing at the beach, and time with family, especially granddaughter Eastynn.