Early risers enjoy nice weather for Art in the Park

The Saturday for the 16th annual Art in the Park at Stark Park in Orange was a hot, but beautiful day until the rain came in the afternoon.

Jay Trahan, director of the Orange Economic Development Corp., said attendance at the free, community wide event was around 2,000 instead of the anticipated 5,000 due to the weather.

There were 320 vendors, some coming from Abbeville, Lake Charles and Oklahoma.

Brandy Judice, Orange Convention and Visitors Bureau coordinator, said Art in the Park was originally scheduled for April, but it was rescheduled in conjunction with the BassMasters fishing tournament.

Music was provided by L.N. and The Crush from Beaumont and Andy and The Dreamcicles from Clear Lake.

One of those 320 vendors was Henry Lowe with the Orange African American Museum. He was at the event to give the museum some public exposure and to sell annual memberships for a $20 donation. The museum will be located at Third Street and Park Avenue. It will cost $100,000 to complete refurbishing. Jack Elliott, contractor for the Orange Depot, is doing the project for the African American museum.

Lowe said he wants to build the museum to remedy the black history that is ignored in public schools. Also, that young black people can gain an appreciation of the great contributions African Americans made in America. For instance, Dr. Charles Drew who developed blood plasma.

"In the 1950s we had a common goal of citizenship. We have some of the same problems we had then," Lowe said. 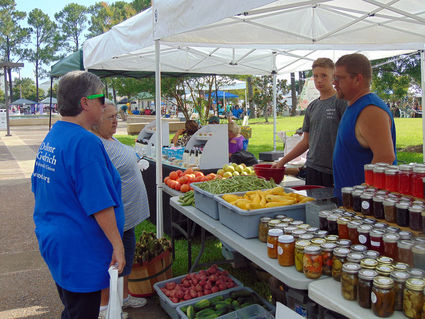 Amy DeLand came from Louisiana to be a vendor for the first time at Art in the Park. She was selling different types of art she painted. She added that the creative impulse comes to her in waves.

"I do a series of things. I like nature scenes," DeLand said. "This (downtown Orange) is a gorgeous area."

Some samples can be seen at http://www.adelandart.com.

Karen and Kaida Leonard, of Orange, were also attending Art in the Park for the first time. Karen said she wanted to see something different. She had an eye on buying one of the quilts she saw displayed.