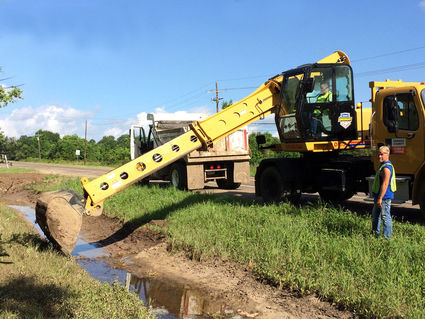 Representatives from Orange County Drainage District, Texas Department of Transportation, and all of the county’s cities are expected to attend along with county commissioners.

“Part of the reason we’re having these workshops is so people can tell us their problems, show us their pictures,” County Judge Dean Crooks said.

“It’ll be as much for us to learn as for them. We’d like to have engineers address a problem right on the spot, if they can.”

Residents are asked to limit their questions and comments to three minutes.

Orange County has been plagued in recent years by flooding.

The Sabine River flooded Dewevyille and parts of Orange County in 2015 and 2016. Heavy rains caused flooding in low-lying areas in the county in June 2017 and June 2018, the latest after 10-12 inches of rain fell June 18.

And, of course, Tropical Storm Harvey, with record five-day rainfalls of about 60 inches in Orange County, damaged about two-thirds of county homes in August, 2017.

“Ultimately, we’d like to have a coalition to work together to develop a master plan,” Crooks said. “In the meantime, we’ve got to try to get this water off of people when we have storms.

Orange County employees are charged with taking care of 392 miles of county roadways, with ditches or drains running along both sides.

County Engineer Clark Slacum, who heads up the Roads & Bridge Department, said he has about 40 employees, 10 per county precinct.

“There’s miles and miles of ditches and thousands of culverts,” Commissioner John Gothia said. “When it’s rainy like it is now, we’re struggling to keep up.

“Nobody likes it. I don’t like it. I’ve been flooded twice.”

Besides Orange County, drainage along state and federal roads – interstate, state highways and farm-to-market roads – comes under the responsibility of TxDOT.

The cities are responsible to maintain drainage along their streets. Jim Wolf, Orange public works director, says the City of Orange maintains about 175 miles of roadways.

“The first thing we want to do is let the people know what drainage district they’re in,” Crooks, the county judge, said. “Then we will, in turn, send a description of their problem to the drainage district, so that we’re all on the same sheet of music.”

Besides addressing immediate problems, Crooks and the area’s other leaders are looking for long-term solutions.

Grant money could fix some of those problems.

“This is about flood mitigation grants,” Wolf said. “The Texas General Land Office and the Texas Department of Emergency Management have FEMA grants. We have some major projects where we have drain crossings we need to enlarge.”

The City of Orange and Orange County Drainage District have jointly prepared Notices of Intent to turn into the state for several projects costing $500,000 and $1 million each. Wolf has envisioned a multi-million-dollar project for a levee system that would stretch from I-10 near Simmons Drive all the way south to Front Street.

“This is pie in the sky,” Wolf said. “What are the odds of those projects getting funded? Probably not too great.”

While Crooks, who just took office in May, is new to the responsibility of Orange County floods, the four commissioners have plenty of experience.

“We’ve made some progress, especially in the north part of the county, but we still have work to do.”

Trahan (Precinct 1) and Gothia (Precinct 2) began their tenures on the court in 2016 and were working on high-water problems before Harvey. Shortly before Crooks took office, Gothia held a meeting with area drainage chiefs.

“We’ve done a lot of projects, and it helped a lot,” Gothia said. “I think we had fewer houses flood [last week] than we would have. But it’s not going to eliminate it.”

“In my opinion, this is probably the single biggest thing facing Orange County,” he said. “We can’t fix the roads without fixing the drainage that’s washing them out.