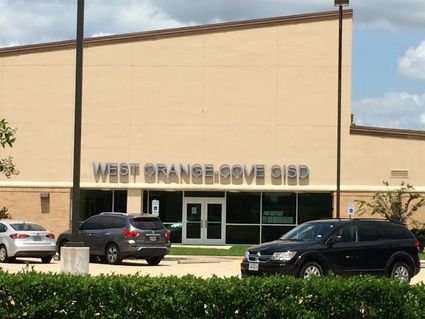 Photo: The school board at West Orange-Cove's voted Monday night for the district to establish its own police department. RECORD PHOTO Dave Rogers

The West Orange-Cove school district could have its own police department as soon as next spring.

That’s what Superintendent Rickie Harris said Monday night, moments after the school board voted 7-0 to establish a district police department.

Harris says the plan is to first hire a police chief, then acquire the necessary equipment, including cars, and then to hire one patrol officer. The chief and that officer would split their time daily among the five WOCCISD campuses.

“This is a significant step,” the superintendent said of Monday’s vote.

“But it’s just one of the things we have to do to make sure we have all our documents in place when we present our application to TCOLE.”

The Texas Commission on Law Enforcement is the regulatory agency over all peace-keeping forces in Texas.

With Monday’s vote, led by a motion from Roderick Robertson and a second by Demetrius Hunter, and a couple of local policy revisions that followed, the ball will soon be in TCOLE’s court.

“In order to get approved by TCOLE, you have to adopt a board policy that allows you to establish a police office, and also you have to get your policy handbook in order,” Harris said.

“I’m waiting to get my MOUs (memorandums of understanding) with the three cities [that contain district campuses, Orange, West Orange and Pinehurst] and the county. Once we get all of those together, I’ll take all of that and submit it to TCOLE.

“At that point, they’ll review it all. Once they give us a department number, we can go ahead with hiring the chief, and then hiring a patrol officer.

“Our plans are we’re just going with two [policemen]. We’ll still use our local police departments to assist us any way we need assistance.”

A year ago, WOCCISD employed one off-duty police officer who was stationed at the high school campus.

After the Valentine’s Day shooting school shooting in Parkland, Florida, that took the lives of 17 students and adults, WOCCISD contracted with Orange, West Orange and Pinehurst to place off-duty policemen at all of its five campuses.

“We started having discussions about [improving campus security] in the wake of the Parkland event,” Harris said.

In May, Orangefield’s school district approved training some school employees to carry concealed handguns on campus as part of the state’s Marshal and Guardian security plans.

Larry Haynes, the district’s director of federal programs, delivered the good news that WOCCISD had won a $214,000 Harvey grant from the Texas Education Agency.

The grant is to repay the district for taking in students from other school districts hit hard by last year’s Tropical Storm Harvey.

Haynes said 36 such students remain enrolled at WOCCISD. He said the TEA grant could be used for a number of purposes such as teacher salaries and transportation.

WOCCISD did suffer an estimated $2.5 million in damage to its middle school [the old Stark High campus], but the school buildings were rehabbed in time for Monday’s start of school.

Robin Hataway, district finance director, said insurance paid more than half of the bills for the middle school and she was finishing up paper work to submit that FEMA reimburse the rest, about $1 million.

She said FEMA had agreed to a reimbursement of $258,000 for other storm losses to the district and that $119,000 of that money had been received by the district.

CORRECTION: A $25.75 million bond election to be held by WOCCISD Nov. 6 is comprised of eight parts – including the return of a cosmetology program, improvements to existing buildings, updates to technology and sports facilities, and the building of new transportation and community events centers – but voters must choose or reject the package as a whole. More information about the bond issue will be published as the election nears.