The famed span across the Neches River that would become the Rainbow Bridge is shown during construction in this 1937 photograph. A marvel of it’s time, it remains an important and vital transportation link between Orange and Jefferson Counties.

From The Record Archives by Robert Hankins

When you look back, it’s amazing that the Rainbow Bridge was completed in under three years. It was naming the darn thing that took forever.

It began as a solution for clogged roads caused by Dryden Ferry traffic. Seventy years later, it still has the tallest vertical span in Texas (177 feet).

It cost $3 million, and the lives of many who worked on it.

The Rainbow Bridge did more than change the landscape, it united Orange County with Port Arthur.

It also served northbound and southbound traffic until 1991, when its neighbor the Veterans Memorial Bridge helped split the load.

In one heated meeting, Jefferson County Commissioner H.O. Mills threw off his glasses and said everyone was, “… acting like a bunch of kids.” Jefferson commissioners eventually decided on “Port Arthur-Orange.” Then in 1957, the North Port Arthur Lions Club sponsored a contest to name the 19-year-old bridge. More than 1,000 entries listed “Rainbow Bridge,” however, the earliest postmarked was by 6-year-old Christy McClintock of Port Arthur. Her grandfather helped her fill out the form. She won a $50 Savings Bond. Her reason, she told reporters at the time, was that the bridge was physically shaped like a rainbow.

At the time of construction in the mid ‘30s, its vertical span was designed with the tallest Naval ship in mind, the USS Patoka, which ironically never sailed the Neches. The ship was decommissioned and sold to a steel company for scrap in 1948. Although the span is dwarfed by San Francisco’s Oakland Bridge (at 218 feet), the Rainbow is 40-feet higher than the Huey P. Long Bridge across the Mississippi, and outreaches the 155-foot clearance of the George Washington Bridge across the Hudson River. It was built to withstand 130-mile hurricane-force winds.

The bridge’s dedication in 1938 saw speeches, barbecue, dancing and fireworks, even a sailboat regatta on the Neches. And of course, a rodeo. According to Port Arthur News archives at the Bridge City Chamber of Commerce (compiled by former chamber vice president Charlotte Chiasson and Joyce Darling), the idea began in the late ‘20s to fix a growing problem with the increasingly unreliable ferry. Residents in Orange and Port Arthur got to thinking, “If Beaumont can have a bridge, why can’t we?”

The proposal had its naysayers, mostly in Beaumont; and in fact, several bond issues which could have funded the bridge which passed in Port Arthur, still lost because of high negative numbers from Beaumont precincts. Proponents included officials in Orange, Galveston and Lake Charles. Finally in the early ‘30s, after much legal wrangling, Gov. “Ma” Ferguson signed a bill that allowed Jefferson County to contribute, along with state and federal funds, to what was being called “The Dryden Tunnel.”

In October, 1935, state engineer G.G. Wickline, a University of Texas graduate, was appointed to supervise the project. Working under him was fellow UT graduate P.V. Pennybacker. Wickline named as consulting engineers Ashe, Howard, Needles and Tammen, at the time one of the four largest firms in the country and working on a $2 million span in Omaha and a $42 million span in Newark, N.J.

In November, hourly wages were announced: $1.25 for mechanics, $1 for crane operators, hoisting engineers and carpenters; 50 cents for riggers, pumpmen and blacksmiths; and $4 to $4.50 for the infamous “Sand Hogs” who would work in the water at depths of up to 110 feet and pressure up to 48 pounds. The $4.50 wage for the lowest depth was eventually raised to about $6.50. And in December, the Union Bridge and Construction Co. of Kansas City, Mo., submitted a low bid of $800,000 for substructure work.

In February, 1936, it was announced that work would begin March 3.

E.M. Philpot, vice president of Union Bridge, said, “Our first job will be to build a road to the bridge site in order to move equipment, already shipped from Kansas City, and materials so that actual construction of the foundation can start shortly.” A series of heated talks then ensued between organized labor and county officials, with labor wanting every job the bridge had to offer.

In April, a phone line was run to the bridge site, and state Sen.

(and future Gov.) Allan Shivers mediated a written agreement between all parties concerning the labor issue.

It was only spoken about in general terms, to the effect that “ … both sides had come to an understanding.” In May, some union men registered at the National Re-employment office for work on the bridge.

In June, 1936, the Sand Hogs, reported to be “fabled in story and song,” showed up. So dangerous was the work, they could only work two daily shifts of 45 minutes each. Their job: to sink the river piers (long hollow cylinders of concrete that looked like a stack of doughnuts) to depths of 100 feet. Concrete was poured into hopper-bottomed buckets. The buckets were raised by a crane and the contents dropped into a steel casing, then eventually lowered deeper and deeper into a “sand island.” Several Sand Hogs were injured or killed by “the Bends,” a pressure-related malady caused by rising through the water too fast.

One such death was Ben Webb, 47, pronounced at St. Mary Hospital after arriving in a Grammier ambulance. But you didn’t have to be in the water to die of the Bends. Henry Womack, 32, was walking down Procter Street when he collapsed.

In May, about 100 Sand Hogs went on strike to demand higher pay. County commissioners approved a $1-per-hour raise for all pay levels. That same month, construction foreman Bruce Lytle, 30, was hit in the head by a steel wall and died at St. Mary. Knocked unconscious by the blow, he fell into the water and sank immediately.

In 1937, it was reported that painting the bridge was like “ … whitewashing Pike’s Peak.” In August, construction employee R. Holzapfel fell from a steel structure 20 feet to the ground.

He was briefly in shock and fractured his left arm.

He was luckier than Marcus Robinson, 39, who died after falling 170 feet into the water.

Around that time, the two sections of the bridge were joined.

Famed odd fact collector Robert “Believe It Or Not” Ripley visited Port Arthur and mentioned his interest in the bridge to a local reporter.

Columnist Tommy Griffin, making the 45-minute trek from the foot of the bridge to its peak, said Texas A&M engineer Gibb Gilchrist called the structure “Mae West” because of it’s “come up and see me” attitude.

The bridge was dedicated on Sept. 8, 1938. Mary Elizabeth Mills, daughter of H.O. Mills, cut the ribbon. Crowds gathered at Yellow Jacket Stadium for talks by Texas 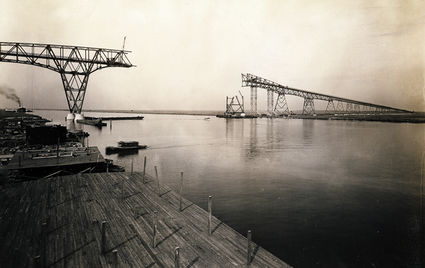 “I had occasion to be on this bridge last week,” Brown said, “and while standing there looking over the water and surrounding territory, I visualized the possibility of a great industrial center along the Sabine and Neches Rivers. In that mental picture I could see industries of all kinds, both large and small, each playing their part in making the Sabine-Neches district the leading industrial center of the south, with this great structure, the Port Arthur-Orange Bridge, playing a leading part.”