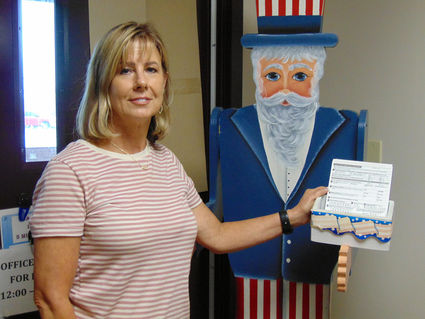 Tina Barrow, elections administrator for Orange County in her office, would like to remind residents there's a little less than a month, October 9, to register to vote in the November 6, 2018 General Election.

Election Day will be here before you know it.

Tina Barrow, elections administrator for Orange County, wants to reminds residents who want to vote in the November 6, 2018 General Election, or early vote, can do so by stopping by the Orange County Elections Office at 206 Border Street, Orange, TX. 77630, during the hours from 8 a.m. to 5 p.m. on Monday through Friday to fill out an application to register to vote and bring back to the office or mail it to the office. Residents may also visit their website at http://www.co.orange.tx.us/Elections_Voter_Application.html, or vote.org, print out the application, fill it out and take it back or mail it to the office.

Those who have moved away from the county may call their office at 409-882-7973 to request an application for a mail ballot. Residents 65 or older, disabled residents or those who live out of state or out of the country may used mail ballots.

The deadline to register to vote is Tuesday, October 9, 2018.

There are seven forms of identification listed to vote in Texas according to the secretary of State site:

You are eligible to register to vote if:

• You are a United States citizen;

• You are a resident of the county where you submit the application;

• You are not a convicted felon (you may be eligible to vote if you have completed your sentence, probation, and parole); and

To confirm your voter registration status, you may select one of three methods to perform a search:

• Your Texas driver’s license number, if you provided it when you applied for voter registration;

• Your Voter Unique Identifier (VUID), which appears on your voter registration certificate;

• Your first and last name.

For more information on voting, go to the Texas Secretary of State website at: http://www.sos.state.tx.us/.