A decade after Ike

Hard to believe it's already been ten years that Southeast Texans were waiting on Hurricane Ike to make landfall on Sept. 13, 2008.

Bridge City bore the brunt of the storm with the storm surge that led to flooding of all but a handful of houses. There was misery, devastation, bad smells, heat and debris. Kirk Roccaforte, currently a Bridge City Councilman was then mayor of the city. He remembers that time well.

He said 10 years ago, he and city staff were pre-planning what their moves would be. An evacuation was called earlier and most residents left the day prior. A mandatory evacuation was ordered two days before the hurricane made landfall on Saturday.

"The water started rising and people took it seriously," Roccaforte said. "We were at city hall Friday evening around 7 p.m. The police made a couple of rounds that evening before we evacuated to Little Cypress Elementary School.

"We were making rescues at first daylight the next morning (after Ike hit) and assessing the situation. We were gathering equipment and boats. There were people up on the bridge, some stuck in their homes, on their rooftops. It was terrible."

Though the city prepared as much as it could for the onslaught of Ike, Roccaforte said no one is prepared for 13 feet of water rising from the surrounding waterways. He added that crews were figuring out damages and calling in support.

"We had a contract with a company we could get supplies from," he said. "In the short term, we were getting citizens back into town, back into their homes and they immediately started to clean up. We brought in temporary housing. We had water and sewer running. Entergy was on top of the power running.

"Longterm was about bringing in assets for recovering from FEMA (Federal Emergency Management Agency) and from the state who provided extra patrols here to protect citizens from looting. We went from house to house to make sure there were no bodies inside of homes, nobody died or if some had injuries."

Though Ike was devastating for Bridge City, Roccaforte believes the city recovered from it a year ago before Hurricane/Tropical Storm Harvey hit. He said the city was back and growing again, though there's still some people in places who have never rebounded.

Jamey Harrison now works for the University Interscholastic League, but at that time he was superintendent of the Bridge City Independent School District.

He said after assessing the damage, he and staff wondered how in the world they would open again. Yet, three weeks after Ike hit BCISD was opened, educating students.

"We thought if we didn't get the doors open quickly enough we would risk losing a large number of students and a large number of citizens," Harrison said. "Getting to a place that's normal for kids is important."

The only building in the district that didn't flood was Bridge City High School. However, FEMA personnel were using it as a hub. They were surprised BCISD was ready to open within three weeks. FEMA was given two extra days to find a new command center and BCISD was off and running.

Harrison credits the school board's leadership and the trust they gave to the administration for the quick turnaround. He told them they would have to spend much money to reopen, but they would get the money back through FEMA and through insurance.

After assessing damages, two categories were created for recovery. Maintenance Director John Scales would work on anything that could be reopened in three weeks while Harrison would handle the list of structures that couldn't be brought back in three weeks.

Harrison said the most difficult work was attaching the porches, decks and awnings to the portable buildings.

"It was crazy, but it was required. They still wanted to be Bridge City kids," he said.

The portable buildings would stick around campuses for three more years. Due to damages to Sims and Hatton, a large citizens committee decided to consolidate the two campuses and build Bridge City Elementary School through FEMA funds, insurance and the Texas Legislature gave a one time allotment to build without a tax increase for the district. The school was built in one year.

"The school district and the city have a symbiotic relationship," Harrison said. "Bridge City was hit really hard. It was really bad, but they survived it. To me, one of the big moments was to play a football game before the school reopened to give the kids a break from the dry walling and other work to their homes.

"A community wide pep rally was held at Walmart with a big turnout. We couldn't play a home game yet, so we traveled to Huntington and we won. It gave us a little reprieve."

Carl Thibodeaux was Orange County judge in 2008. He said AT&T was gracious enough to let emergency management personnel use their building downtown before Ike landed and afterward.

"I lived there for about a week," he said. "I was watching monitors. We went through (Hurricane) Rita before. We moved our command center to Mauriceville Elementary School because it had the least amount of windows."

Thibodeaux said Ike was a water event while Rita was a wind event. Ike had powerful storm surge that pushed a dome of water across the Gulf of Mexico.

"We tried to do our best and guess what kind of storm it would be," he said. "Evacuations went out. We had to get the prisoners in jail moved west to different locations. 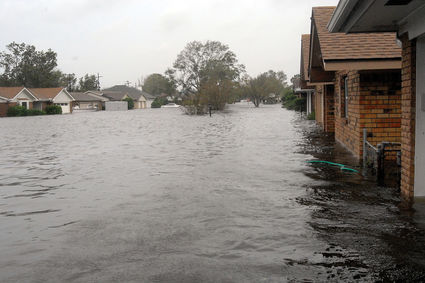 Elsie Lane in Bridge City is seen just after daybreak on the morning of Sept. 13, 2008.

For the first few days after the storm, Thibodeaux said water search and rescues were done. After Rita, residents could return to their homes two or three days later. With Ike, they couldn't get home as quickly because of the flooding.

"Orange County people are masters at recovery if they're given the tools for recovery. Local people were responding. It was a team effort. I was blessed with the emergency response team we put together before Ike. They were well trained," he said. "The sheriff's department and the national guard had high water vehicles that all helped. There were people working behind the scenes. All the cities were on board, working together. I'll remember that for as long as I live."