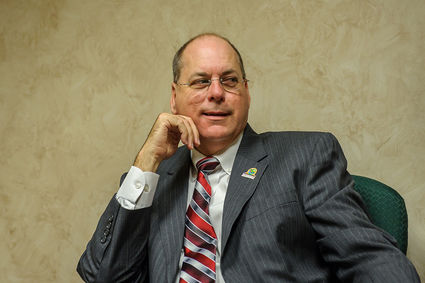 The City of Orange held tax rate and budget hearings, doled out its hotel occupancy tax funds and agreed on a new disaster pay policy.

At Tuesday’s city council meeting, Orange’s elected leadership also gave tentative approval to an ordinance allowing ice cream trucks and acknowledged it will soon by saying so long to Shawn Oubre, city manager for the past 13 years.

Oubre was hired Friday to take the same position in Woodway, Texas, a Waco suburb of fewer than 10,000.

He said Tuesday his contract with Orange requires 30 days of notice, but that he could stay as long as six weeks.

No citizens came up to speak during the public hearings for the budget or tax rate. Council members will take a final vote on those at their next meeting, 5:30 p.m. on Sept. 25.

After some cutting in four budget workshops, the 2019 budget as currently proposed shows general fund revenues and expenses of $22 million, and a total budget of $37 million when water and sewer, capital outlay and debt service accounts are added.

This is a rise of 9.736 cents per $100 value from last year, but it does not apply to senior citizens who have filed to have their rates frozen. With a drop in many property values because of Tropical Storm Harvey, many taxpayers will get a decrease in taxes.

Councilman Brad Childs voted no in a 6-1 record vote for approving the budget.

Councilman Bill Mello voted no to this, making it a 6-1 vote.

Council voted in favor of changing an ordinance which has essentially prevented the sale of ice cream from motor vehicles, but the new wording needs some work.

Councilman Patrick Pullen asked if the ordinance could require a criminal background check for vendors, a 10-year hold on records, and posting of operating hours.

Oubre said his staff would check the legality of the changes and offer a second draft.

Unanimous council approval was given to approving the Orange Economic Development spending up to $50,000 with Spanky’s Bar-B-Que for infrastructure improvements.

Spanky’s owner Mike LeMoine has acquired neighboring properties and wants to expand his parking. He says adding 38 spots would increase his revenues by $750,000 a year and require the addition of up to six full-time employees.

Council approved a motion to declare the old firehouse on Strickland Drive “surplus,” which opens the possible sale or donation of the structure and adjoining land to a non-profit, such as the Orange Lions Club.

A couple of post-Harvey deadlines were extended.

Council voted to extend through the end of the year the waiving of building permit fees, and to extend through Feb. 28 permission for homeowners to use RVs and travel trailers on their residential property while they repaired their homes.

The city’s Convention & Visitors Bureau was awarded $392,500 for its budget and $80,000 was set aside to overhaul and repair the boardwalks at the Orange Boat Ramp and Walk Bridge.

Lutcher Theater was awarded $50,000 and $30,000 each went to Heritage House and the Chamber of Commerce’s national fishing tournament. Friends of the Orange Depot were awarded $15,000, $10,000 went for Riverfront Boardwalk and landscape maintenance and the Gulf Coast Cajun Festival and SETAC Off Ramp Magazine each were awarded $7,000.

The Chamber’s Mardi Gras parade was awarded $5,000, as was the Orange Lions Club.