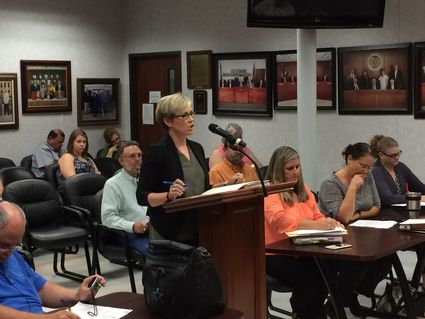 Jessica Hill, director of Orange County's Economic Development Corporation, made her case before county commissioners Tuesday to restore budget funds that were on the chopping block. RECORD Photo: Dave Rogers

Like every other politician running for office in Orange County, Dean Crooks said during his spring campaign the county needs more economic development.

But it turns out that Crooks, now County Judge, is no fan of the current Orange County Economic Development Corporation.

Tuesday, he cast the only vote against continuing what county commissioners began a year ago, an annual budget of $375,000, which includes membership dues.

Commissioners Johnny Trahan, Barry Burton, John Gothia and Jody Crump all voted in favor of the $375,000 amount, which is actually $150,000 less than commissioners set aside for OCEDC last year.

That’s basically the employment cost for OCEDC Director Jessica Hill – her $92,394 salary and benefits -- and $2,400 for utilities.

Crooks noted with $246,000 the county could purchase four completely equipped Chevy Tahoes for the Sheriff’s Office or give a 1 percent raise to all its employees.

“We have a $4 million [budget] deficit,” Crooks argued during Tuesday’s Commissioners’ Court meeting. “We’ve got to start looking for things to cut.”

A Monday morning budget hearing for the OCEDC drew a standing-room-only crowd of supporters opposed to Crooks’ stringent cuts.

The four commissioners made their belief in the OCEDC known Monday and Tuesday.

But the vote didn’t change Crooks’ mind. He let his hair down in a no-holds-barred interview after the court session ended.

He said the OCEDC “hasn’t gotten any results,” and the only thing different about this organization from the one that was de-funded and reorganized in 2015, was the amount of money the county spent on it.

He also noted that Hill, hired in 2016 after working in economic development for more than a decade in Beaumont, was getting a “5 percent raise and a $9,600 car allowance,” while regular county employees are getting no raise in 2019.

“I don’t feel comfortable taking money from people who don’t have their home fixed yet [after last year’s Tropical Storm Harvey], to pay for something that hasn’t gotten any results,” Crooks said.

“There’s nothing new about this EDC except for the money we’re giving them.”

A year ago, commissioners, headed by then-County Judge Stephen Brint Carlton, tripled the county’s contribution to OCEDC to $375,000. They also set aside $150,000 in restricted funds to be used for land acquisition.

But then Harvey happened.

Hill, presenting in front of commissioners for the second day in a row, said Tuesday, “I would say our greatest accomplishment [last year] was we were able to give $200,000 back to our small businesses in Orange County.

“Eighty percent of our economy in Orange County is made up of small businesses. I’m proud that we were able to help them during a time that they weren’t getting a lot of funding and help from other areas.”

Hill also outlined a lot of efforts she was making to attract large industry and small business to Orange County. She said OCEDC is currently engaged with new business prospects that could bring projects worth $9 billion to the county.

“That represents over 1,000 permanent jobs and over 2,000 construction jobs,” she said. “Those industries are plastics, logistics and marine services.”

Burton, who until recently represented Orange County on the Southeast Texas Regional Planning Commission, joined with Carlton and officials of local cities in 2015 to re-envision and revise the ODEDC.

“All the stuff you’re working on is very positive,” Burton said.

“I’m tempted to let you have what you had last year. You’re doing good work. This is the only time we spend money that actually brings business here, brings jobs, brings sales tax, brings property tax.

Jasper County is now a part of the Deep East Texas Council of Governments but Jasper County Judge Mark Allen said “we have a lot in common with the three SETRPC counties.”

Commissioners also approved interlocal agreements between Orange County and the county’s seven municipalities to make a joint effort in procuring a pre-disaster contract for debris hauling and monitoring.

They also paid $332,906.08 in bills and okayed a half dozen intradepartmental line-item transfers.