OF church loving their faraway neighbors 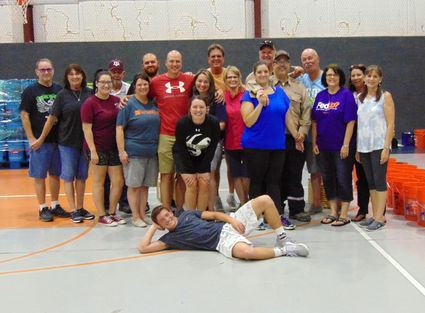 Members of First Baptist Church of Orangefield have banned together to help those in the Carolinas that are suffering from the floods of Hurricane Florence. The congregation is returning the favor from when Harvey flooded here and volunteers from the Carolinas came to help.

One thing for certain — Southeast Texans know what it's like to go through a hurricane and to recover and rebuild from one.

First Baptist Church of Orangefield, likewise, is extending that empathy and experience to residents of North Carolina and South Carolina who are suffering from Hurricane Florence.

Pastor Cody Hogden said the church and the community started collecting supplies last week to bring to the Carolinas.

"We had a distribution center here at the church for two weeks during (Hurricane and Tropical Storm) Harvey. Two guys from North Carolina and South Carolina helped us here. John Harwood brought in two 18-wheelers full of supplies and a guy I only knew as Jimbo, from Myrtle Beach, brought a crew to mud out homes. We know someone who is personally impacted and we started to gather supplies to bring."

Since the church started collecting last week, people have donated a semi truck and four 20-foot cargo trailers. In addition, six churches from Buna to Beaumont have brought supplies.

Hogden said the church is sending cleaning supplies, tools to gut a home, baby stuff, paper goods and dog and cat food. He added that the church isn't collecting clothing to send at the time because they couldn't handle that with the other supplies and the clothes could possibly rot with the humidity as they did during Harvey when others sent them and they had to be discarded.

"It's good to pay back," he said. "God did the same thing for us. We wants us to be the tangible hands and feet of Christ," he said.

April Joyner was collecting and sorting out supplies for loading at the church. She said she's motivated to help because Jesus loves others as He loves us.

"They're at a really low point at this time in their lives as we've all been (from Harvey)," she said.

Joyner said she and her family were blessed because their Orangefield home didn't flood during Harvey and in turn, they could help others.

The church will continue to collect donations and gift cards from 6 to 8 p.m. until Thursday at the church, 9788 FM 105 in Orangefield.