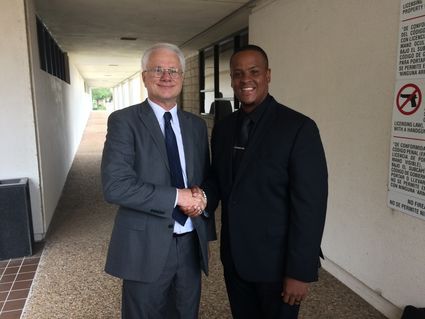 The City of Orange named Planning Director Kelvin Knauf as its interim city manager Tuesday while council member Annette Pernell expressed her intent to stay in the city.

Pernell suggested considering hiring young lawyers instead of keeping the jobs in the hands of longtime office holders.

“We have a two-year contract that has lasted 17 years,” Pernell said.

Smith, who has been city attorney for nearly three decades, said the only contract with city judges and attorneys, including himself, was for the rate of pay during their service, not the length of service.

They serve at the pleasure of the council and can be fired at any time the majority of council members choose, Smith said.

That was news to Pernell, a two-term council member, and she was upset that she hadn’t been provided that information sooner.

“You cannot withhold information because we didn’t ask for it,” she thundered. “Give me that information when I ask for it, whether you think I need it or not.”

Pernell was called to task by Alan Mesecher during citizen comments for a remark she made in front of Beaumont City Council last week.

The online video of that Nov. 2 meeting’s first citizen comments period shows Pernell praising the quality of life in Beaumont and saying she planned to move back to that city soon.

“If you don’t like being here on city council, or in the city of Orange, just pack up and move,” Mesecher said Tuesday.

Pernell later acknowledged her words, explaining she and her husband “were looking to move there [to Beaumont]” because of squabbles with her Orange neighbors so bad “we finally had to file a lawsuit against them.”

But the 16-year Orange resident vowed to continue living in Orange and serving on council.

“My job is to help the city and to do that I have to put personal things aside,” she said. “But it’s hard.”

At the other end of a two-hour meeting and a third hour of closed session, council announced the temporary promotion of Knauf.

A former city manager in Rockport, Port Aransas, Lakeway and Corinth who has worked for Orange for four years, Knauf is expected to serve four to six months while the council seeks a replacement for Oubre.

Oubre was hired away by the Waco suburb of Woodway after 13 years as Orange city manager. Friday is his last day here.

Salary for Knauf will be $150,000 per year prorated for how many months he serves. Jay Trahan, the city’s assistant manager, said council should select a search firm at its next meeting, Oct. 23.

Earlier, both Pernell and councilwoman Terrie Salter took issue with the response time of Acadian Ambulance Service, listing a couple of examples.

Councilman Bill Mello reminded council members what would be involved in changing the contract, then made a motion to extend the agreement with Acadian as is for another three years.

“Remember how much heartburn we had on going up on taxes,” Mello said. “If ya’ll want to do that some more, that’s what we need to do.”

All council members but Salter voted to approve the extension as is.

In other business, council approved the allocation of $5,000 of hotel/motel tad funds to the Orange Lions Club, agreed to a 2.5 percent cost of living raise for its police officers and approved a $2.7 million budget for the city’s Economic Development Corporation.

More than $1 million of that budget is expected to come from the EDC’s surplus balance of $3.3 million.