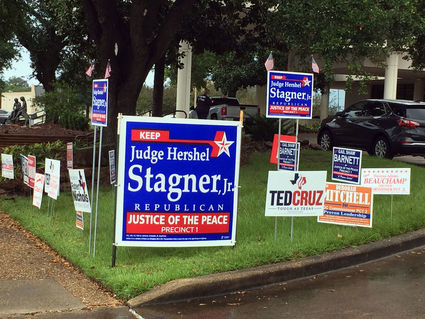 Cutline: Candidates’ signs line the walkway to the Orange Public Library, host to early voting for the Nov. 6 general election.

How badly do Orange Countians want to vote in next month’s General Election for federal, state and county legislators and officials?

Well, more than 2,200 mail-in ballots had arrived at the County Elections office by last Friday, compared to 850 for the last mid-term election, in 2014.

A total of 2,400 people voted in person Monday, the first day of early voting, at one of the county’s four early voting locations.

“We’ve had a ton of people come and register,” she said.

Orange and Vidor led the way in Monday’s voting with 773 voters marking their ballots at the Orange Public Library and 748 marking theirs at the Raymond Gould Community Center in Vidor. Bridge City (572) and Mauriceville (302) were the other sites.

Tuesday, the early voting sites were open late, as they will be next Tuesday, Oct. 30. Tuesday voting totals weren’t available at press time.

If you’re scoring, Republican Senator Ted Cruz, who is up for re-election this year, received 73 percent of the Orange County vote when he first ran in 2012.

Locally, a total of seven county-wide races feature Republicans only.

The two local races with a choice are Precinct 1 Justice of the Peace and Precinct 2 Commissioner.

Republican Hershel Stagner, Jr., who stepped in for retiring Judge David Peck in 2017, is taking on Democrat Gail Barnett.

Barnett, a local attorney who has previously served as JP in Mississippi, ran unsuccessfully against Peck in 2014.

For the Commissioner’s race, Republican Theresa Beauchamp is taking on Democrat Deborah Mitchell after Beauchamp ousted incumbent Barry Burton in the primary.

Also residents of the West Orange-Cove CISD will be voting on a $25.7 million school bond election.

Texas has not elected a Democrat for state office since 1994.