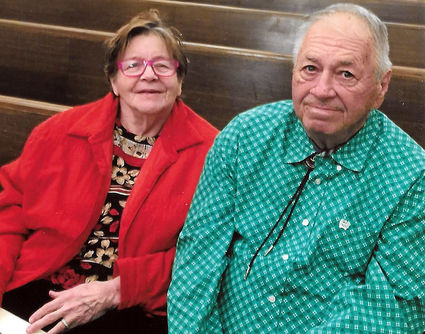 Photo: Edna and John Knight are members of the First Baptist Church Bridge City. John, now in hospice care, tells interesting tales about his time in Southeast Asia more than 50 years ago.

John Knight of Bridge City will be 75 years old as the United States observes the Nov. 11 Veterans Day over this weekend and Monday.

Knight never expected to live long enough to be a veteran.

The retired iron worker says he spent two years as a Viet Cong prisoner after being shot down over Cambodia in 1962.

Knight, who ultimately escaped via Thailand, was among a crew of 26 on the giant Lockheed Constellation.

“I was one of two that survived,” the U.S. Navy Chief Petty Officer said.

But you’ll have to take Knight’s word for it. Like the Impossible Mission Force from TV and movies, the U.S. government disavowed any knowledge of Knight’s flights over Vietnam’s western neighbor.

“Denied truth,” is what Knight called it.

“According to my records, I spent my time on a seaplane tender in Rota, Spain. There’s only two things wrong with that: they didn’t have any seaplane tenders and Rota is an air base, not a sea base.”

It would still be two years before President Lyndon Johnson authorized direct U.S. involvement in Vietnam, a bloody 12-year engagement that caused division and upheaval on the homefront.

“It was an out-and-out civil war that we got pulled into,” Knight said of the U.S. siding with South Vietnam against a North Vietnamese Army assisted by Communist China and the Communist guerilla group known as the Viet Cong, or Viet Minh.

“It was a dirty little war. But it was the war we had.”

Knight said he was awarded the Silver Star for bravery.

“But I didn’t claim it,” he said. “I didn’t want anything to do with that war. Wars are never fought for the reasons people say they’re fought for.”

It was the ongoing Cold War with Russia that put Knight on that huge listening post flying high over Cambodia.

He was fast-tracked to his new duty station.

“I spoke Russian and they wanted a Russian translator,” he said. “I was a monitor. They were trying to prove the Russians were flying flights in there.

“We’d fly around [monitoring radio communications] and if we heard someone speaking Russian, we’d beat it over there. But we never heard any Russians.

“All kinds of Chinese followed us, though.”

Knight, a member of Bridge City’s First Baptist Church with his second wife, Edna, knows things could have turned out worse during his time in Southeast Asia.

“We flew regular patrols,” he said. “They repainted our plane so there were no markings showing and before we flew, we had to take all insignias and patches off our uniforms.

The lack of markings didn’t keep the plane from being shot down nor keep Knight from being identified as an American.

“I was lucky. Our plane came down near a Viet Cong base and I was captured by them instead of the Cambodian Khmer Rouge,” he said. “The Cambodians didn’t take any prisoners.”

Knight said he was also lucky to be treated well as a prisoner.

“They were pretty civil to us,” he said. “The Viet Cong had more battles with the Khmer Rouge than the South Vietnamese.”

He said he escaped during a transfer by truck by hiding under the body of a dead Cambodian soldier.

That allowed him to return to Southeast Texas, marry first wife Ida and start a family of daughter Kris and son John. After Ida passed away in 2015, he married Edna and picked up a new family at Bridge City First Baptist.

Church and family members have filled his home with love and attention this week after he began hospice care in his fight against COPD, chronic obstructive pulmonary disease.

Knight said he returned to active duty after his escape and spent a total of 10 years in the service, continuing as a Russian interpreter listening to radio intercepts.

“I spent a year with the [aircraft carrier USS] Enterprise and a year in Long Beach. It was interesting,” he said. “They still wanted to prove the Russians were talking.”

Some other intelligence came his way, he claims. It had to do with Nguyen Cao Ky, the prime minister of South Vietnam from 1965-1967.

“The orders for him to be removed came across my desk,” Knight said. “It said, ‘It would behoove the interests of the United States if Nguyen Cao Ky was not the commander anymore.’

“But if you write that, I’ll deny that. And there’s no way you can prove that,” he said with a wink.