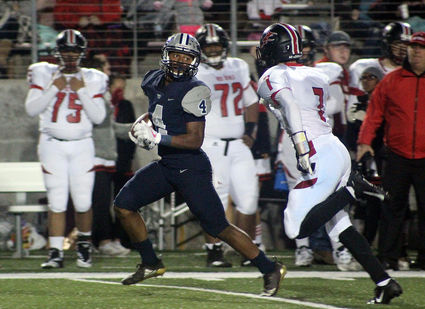 A 72-6 bi-district win will do a lot for a team’s confidence, but the going figures to be a bit tougher for West Orange-Stark when it takes on Sweeny Friday afternoon at 1 p.m.

in a Class 4A Division II area round game at 1 p.m. Friday.

The neutral site for the Class 4A Division II game is Texan Drive Stadium in New Porter.

The winner faces either Jasper or Bellville in the region round next week.

But the Bulldogs have outscored their opponents by an average margin of 44-8 this season, losing only to Wharton, 17-15.

The 21 points they scored against La Grange were the fewest they have scored in any of their 10 wins, topping 50 points on four occasions.

They outscored their trio of Houston ISD opponents in 11-4A (Scarborough, Kashmere and Booker T. Washington) 187-13.

The Bulldogs finished No. 11 in the Class 4A AP Top 10, meaning they topped the “also receiving votes” list.

Senior quarterback Joe Effenberger has passed Sweeny to 847 yards and 13 touchdowns against just two interceptions, according to MaxPreps stats.

Junior Justice Clemons has 18 catches for 399 yards and eight TDs.

But the Bulldogs pick up 75 percent of their 400 yards offense per game on the ground.

Senior Cameron Adams has rushed for 1,255 yards and 11 touchdowns while junior Quinton Martin has 809 yards and eight TDs overland.

The slow-starting 10-4A champion Mustangs, now 7-4, have won five in a row since falling to Jasper, 34-24, in their last non-district game.

Running back Kayvn Cooper leads the Mustangs with 629 yards and six TDs rushing and four other players have 294 yards or more.

The trip to Texan Drive Stadium will be the second in as many weeks for the Mustangs, who had their first 50-plus scoring day of the season in the bi-district matchup against 3-8 Huntington, 9-4A’s fourth-place squad.

A total of six Mustangs combined for nine rushing TDs and Jerren Terrell threw for 85 yards and a touchdown to Chavon Crawford.

The Battlin’ Bears closed their football season with a 4-7 record after District 12-4A Division I runnerup Navasota struck for a 38-7 bi-district win.

Little Cypress-Mauriceville quarterback Adam Pope chipped in 150 total yards (100 passing). His 35-yard run set up a QB sneak for a TD that cut Navasota’s lead to 17-7 at halftime.

But the Rattlers rattled the 10-4A third-place Bears for three yards for every one of theirs, ripping off more than 450 total yard stripes running and passing.