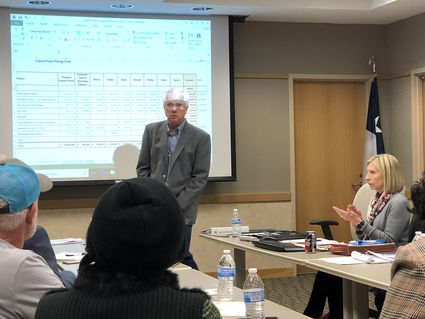 Before a full house at the Orange Police Department Danny Gray community room, they allocated most of that total to fixing Orange streets ($3.1 million) and converting the Orange Natatorium into an indoor recreation center ($3 million).

Other projects for the remaining money include $800,000 to build a pavilion at the Orange Boat ramp that could host fishing tournament weigh-ins and other activities.

Fire Chief David Frenzel was granted his Christmas wish with $600,000 designated to replace Engine No. 7, a pumper truck that is 19 years old.

Other set-asides include $200,000 to buy a new emergency generator for the new City Hall and about $250,000 for streetscape improvements.

“This, to me, is a monumental step for Orange,” Mayor Larry Spears, Jr., said. “We’re setting the tone in improving our city.

“These are quality of life things. It’s going to make Orange better.”

Projects that didn’t make the final cut included $250,000 for sidewalk improvements and $650,000 to tear down and replace the 20-year-old Lions Den Park playscape.

Kelvin Knauf, Orange’s interim city manager, explained that spreading the city’s repayment of the COs out over as many as 10 years was preferable to, say, paying all $600,000 for a new fire truck out of this year’s general budget.

“That would be paying now for something we’re going to use for many years,” he said. “This way, future residents will share in both the benefits and the expense of the fire truck.”

Spears had the citizens cheering when he announced near the end of the Tuesday’s public workshop that Orange had received a $7 million reimbursement for damage from Tropical Storm Harvey and pointed out that all of those funds would go into cleaning up the city.

Knauf said the certificates of obligation won’t be funded until April at the earliest, “but we really need to get it started.”

He then asked council members to each come up with $8 million worth of projects from the $10 million on the wish list.

The road work, rec center, boat ramp pavilion and fire truck were unanimous picks with the exception that council member Brad Childs asked for a $4 million roadwork investment while the other six on council wrote down $3 million.