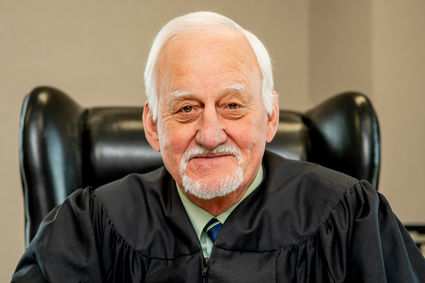 “The level of success you achieve will be in direct proportion to the depth of your commitment,” was written by author Roy T. Bennet.

There is no doubt, Judge Buddie Hahn's commitment to the law which spanned fifty years has been filled with success.

Hahn grew up in Sanderson, Texas which is just west of Del Rio. He graduated from the University of Texas in 1966 and from law school in 1968. That same year he was sworn in and his journey in law began.

Out of law school, he headed to Beeville where he would work for a prestigious law firm. After a few years, it was time to spread his wings.

During law school, due to the alphabet, from Hahn to Haliburton, the pair struck up a friendship which would later lead him to Orange County. Grover Haliburton served as Orange County Judge from 1971-76.

However, Hahn would make his move to Orange County in 1972 when he joined a private practice in Vidor. It was here he would take on one of the county's noted cases. Hahn became a court-appointed attorney for Clifford Blancett who was charged with the 1974 death of Orange Police Department Capt. Danny Gray.

Billy Ray Dowden was given a life sentence in the ground breaking case. Although he was not the shooter, it was ruled Gray was murdered because of the actions of Billy Ray Dowden, Charles Dowden and Clifford Blancett and therefore they would be held accountable.

At about 4 a.m., Charles Dowden’s brother, Billy Wayne Dowden, along with his accomplice, Blancett, arrived at the jail to break his brother out of jail. Charles Dowden was upstairs in a jail cell when the chaos began which ended in the death of Gray. Blancett fled the scene but was later found hiding in a houseboat in West Orange where he was arrested. Blancett opted for a trial which took 3 weeks to complete. In the end he was given a life sentence.

When Don Burgess filed to run for the Texas Court of Appeals, Hahn was appointed in 1984 to replace him on the 260th bench. Hahn would continue his job as judge. He ran unopposed eight times for each four year term.

Not long after Hahn was appointed judge, he oversaw a capital murder trial in his court room involving a young man, Bobby Joe Wills, who shot and killed an attendant at a Simmons Drive convenience store. Willis was found guilty and given the death penalty. More than a decade later after the trial, the sentence was reduced to life in prison where he later died.

In his years on the bench the judge has heard many cases. Two cases stick with him.

One is a case of indecency with a child about 20 years ago by the father of an adopted daughter. The jury eventually found the father not guilty, and the family abandoned the young girl leaving her without a family, love and support. Hahn attempted to keep up with the girl as her life spiraled out of control. Her tattered life still haunts the judge.

The other controversial case was a boating accident about a decade ago which took the life of three persons. The defendant in the case pled guilty to driving while intoxicated in Hardin County days before the boat he was driving hit a stump in the river killing his wife, brother, and his brother’s girlfriend. Hahn sentenced the man to five years in the prison while the family of the girl killed in the accident wanted more time in prison for the man. Hahn said he understands why they reacted this way, but he says the defendant also suffered losses with his wife and brother being taken in the crash.

Over the years, there have been emotional times for some cases, but there are times when he takes great pleasure in sending them off, he said.

Sometimes he receives letters from the community who disagree with the sentences given.

A judge can only do their job based on what the law allows, he added.

"About 50 percent agree, and the others don't, Hahn said.

Hahn said he actually retired on June 30th, and has been waiting for Steve Parkhurst to be appointed to take his place. But, that appointment never came. As a result, Hahn has been a visiting judge. He will continue to be a visiting judge somewhere in Southeast Texas once Parkhurst takes the bench.

When not working as a visiting judge, he has plans to travel with his wife, of fifty-two years, Carol. They have an exciting 12 day trip to India planned in the near future. He may get back into his golf game too.