January is School Board Recognition Month, and Bridge City and Orangefield ISDs will join the Texas Association of School Boards and other districts across the state to honor the countless contributions of locally elected advocates for Texas school children and public schools.

“ I am very honored to be on the school board. I love working with the students and the community. Giving back to the community where I went to school is important to me,” said Brad Frye, OFISD school board member.

In most districts, members serve four-year terms. Their terms are staggered so seats don't become open all at once. School board elections may only be held on the second Saturday in May or the first Tuesday after the first Monday in November. Special elections to fill vacancies that occur between elections may be held as deemed necessary, according to the Texas Association of School Boards.

Once elected, trustees are required to undergo training in three types of continuing education. They include an orientation to local district policy and to the laws related to public education in Texas. They also do an annual team building activity with the rest of the board and superintendent. Plus, they do a specified number of hours of training each year in areas of special needs.

Local school boards also known as boards of education, school committees, school directors, or trustees are elected or occasionally appointed, to be leaders and champions for public education in their states and communities, according to the Texas Association of School Boards.

"It is the mission of the Orangefield Independent School District to promote student success in all aspects of the teaching/learning process.

Our school system is made up of highly motivated lifelong learners who are committed to building positive relationships with students and community.

The Orangefield ISD Board of Trustees selflessly serve the students while embracing the community values of Orangefield," said Dr.

"We greatly appreciate the service and dedication of each of our trustees.

This group of volunteers work tirelessly while serving our students, staff, and community.

We could not achieve all that we do without their guidance and leadership.

Our board has a vision for developing responsible citizens by creating equal opportunities for all students through opportunities that foster innovative leaders prepared to be successful in a global society."

The history of school boards began with a local democratic control of public education and was a strongly rooted tradition in our country long before it became an independent nation. In 1647, the Massachusetts Bay Colony passed a law requiring towns to establish and maintain schools.

These early schools were administered by the citizens through their town meetings. As school matters became more complex, control was given to the citizens’ elected representatives, the selectmen, and later to committees of townspeople who hired the schoolmaster, provided schoolhouses, and attended to other school-related matters.

By the early 1800’s these school committees developed into continuing bodies which were separate from the rest of the town’s government. In 1826, Massachusetts formally established the system of school committees by requiring each town to elect a separate school committee to have “the general charge and superintendence” of all the public schools of the town. Over time, this model spread to the rest of the nation, insuring that local citizens would have a direct voice in the development and governance of their public schools to where it is today.

School board members tackle a difficult job and shoulder enormous responsibilities. These men and women are elected to establish the policies that provide the framework for our public schools. They provide vision and leadership in their roles as advocates, and they will continue to stand up for public education and guard against anything that takes away from our children or undermines our public schools, according to information received from BCISD. 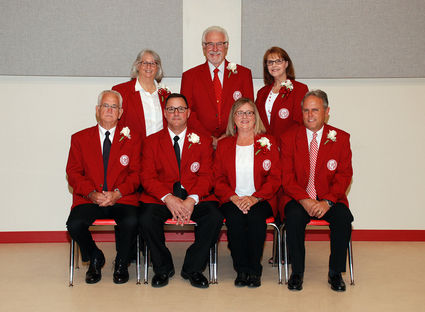 "I am honored to work with the Bridge City ISD Board of Trustees. The entire school board supports our students in every aspect of our school district. They work closely to ensure that our students have the resources necessary to be successful. Our students are truly put in the forefront when make decisions for the school district. Please take time to thank them for their dedication," said Todd Lintzen, BCISD superintendent.