BC Chamber names Andrus Citizen of the Year 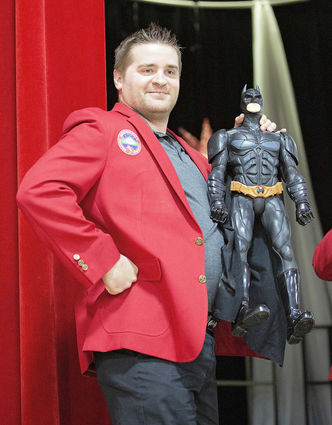 Bridge City Chamber of Commerce ‘Citizen of the Year’, Eric Andrus, steps on stage to receive the award and a two foot statue of Batman.

With a huge smile on his face, Eric Andrus walked up to the stage Monday evening at the Bridge City Chamber of Commerce Taste of the Bayou 59th Annual Banquet, to claim his prize, a two-foot-tall statue of Batman and of course an award too.

Andrus has been chosen by the Bridge City Chamber of Commerce as Citizen of the Year.

Andrus had missed the meeting where the members chose him as citizen of the year. They later called to inform him of their choice.

Andrus told the audience during his acceptance speech, he had asked them why they chose him when there were so many more deserving people.

"I am very humbled," Andrus said.

Andrus is a lifetime resident of Bridge City and graduated from Bridge City High School in 2001. He is the son of Thomas and Carolyn Andrus who opened Central Office Supply in 1975. Thirty years later, Andrus took over the family business and changed the name to COS Printing.

It wasn't long after then, Andrus began a life of service to the community. In 2007, he joined the Bridge City/Orangefield Rotary Club and received various awards and recognition for his various activities. Andrus was recognized as a Paul Harris Fellow. He served as a president and received awards such as, District Spotlight Award, Rotarian of the Year, Roll of Fame and Presidential Citation Award.

Andrus volunteers for Rotary events and activities such as the Annual Bunny Run and Easter Egg Hunt. He participates in the Rotary Youth Leadership Awards. RYLA is a three day event which helps more than 300 students each year become future leaders.

Andrus told the audience he dresses up in various costumes for the children in the community. One of these costumes is Josh the Otter to teach children about water safety. The other is transforming into a favorite of his, Batman.

Volunteering is important to Andrus and he participates in the annual Light of the World/Project Glow Christmas program which benefits the Bridge City/Orangefield Ministerial Alliance.

In 2011, he served as the Bridge City Chamber President. He currently serves as Ambassador Vice Chair and is on the Board of Directors. Andrus stays busy as an ambassador and has chaired numerous Murder Mystery Dinner Events. His list of awards for the chamber includes, Business of the Month in 2011 and again in 2018. COS Printing was Business of the Year in 2009.

Andrus commitment to his community continued when he was elected to the Bridge City City Council in 2010. He still has his seat on the council too.

There have been more awards for Andrus too. He recently received the Community Builders Award from the Bridge City Masonic Lodge.

When not spending time with his wife, Caitlyn, or participating in his many community projects, he may be doing one of his hobbies such as woodworking, traveling or acting.

"I love the city with all my heart and all of the people in it," Andrus said.