“I used to work in Vidor,” counselor Annette Allen said, “and it was rare when we had twins over there. That’s not the case here.”

Orangefield Elementary School has 19 sets of twins among its pre-K through fourth-graders, 5.1 percent of its students.

OES has 19 sets of twins among its 742 pre-K through fourth-graders.

There are 31 sets of twins in the entire Orangefield school district, 3.4 percent of the district enrollment of 1,800.

That’s just above the 3.3 percent national rate, which has nearly doubled in the past 35 years.

The numbers really hit home for Allen one day in January.

“When we started taking our spring portraits, the photographer said, ‘Didn’t I just take that child’s photograph?’

“And that’s when we started putting our multiples together for a group shot,” Allen said.

“It’s kind of weird,” Gavin Gravett, a fourth-grader, said of being amongst so many twins.

“You walk down the hall and you see all these kids walking together who look alike,” said Graham Jenkins.

But plenty others require a double take to tell them apart.

Graham and Evan Jenkins are the principal’s children, among three sets of twins in the fourth grade.

Third grade at OES has four sets of twins while second grade has only one and first grade two.

There are seven sets of twins in kindergarten and two in pre-kindergarten.

Five of the sets of twins are brothers and sisters, like Gavin and Eliese Gravett. Along with the Jenkinses and Colton and Keller Dosch, they’re the eldest twins in the school, 10-year-olds.

“Most of our parents have requested we separate their twins in different classes,” Amanda Jenkins said.

“We had an incident in first grade when we were at St. Mary’s,” Eliese Gravett said. “Gavin pulled my hair.” 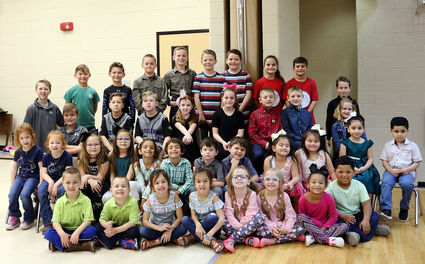 “My uncles were identical twins, who both graduated from Orangefield High School,” she said.

“We had a set at the junior high that did that last year. But they got caught. Their handwriting was a little different.”