Following the death of two-year-old Savanna Roque by the hands of her father, Geo Roque, his family is still searching for answers as this was not the man they knew.

Yohavnis "Geo" Roque and his brother, Lazaro Roque, grew up in Florida. According to their mother, the boys had it all. Each had their own room and Christmas was a spectacular event in the young boys lives.

Geo had an interest in dinosaurs and outer space as a boy. His mother went to the library on Saturdays to check out books on each subject for Geo to pour through. As he finished each book, he eagerly only wanted more books to read.

On one memorable Christmas, Geo's bedroom wall was decorated with a large flying pterodactyl.

Like most teens he played video games too. His favorite was Warcraft which was a subscription game.

Life changed for Geo when he fell in love with Rachel Foster whom he met on an online dating sight. They were together a few months when she found out she was pregnant. The young parents were overjoyed. They were living with Geo's mother and she helped them along the way as they prepared for the birth of Savanna.

Rachel taught ballet and dance at a local school. There the future dancers loved their teacher. Later, Savanna was offered a scholarship to the school where her mother once taught.

Things turned upside down for Geo when an alleged drunk driver destroyed his life the way he knew it.

Savanna was just weeks old when on Father’s Day evening, Geo ran out of gas and was stuck on the side of a South Florida highway. He had tried to call someone else, but when they couldn't come, he called Rachel for help. An alleged drunk driver struck Rachel as she exited her car sending her body flying through the air and killing her. The driver also struck Geo's vehicle which resulted injuries to him too. Geo had a punctured lung, shattered bones in his left leg and a large laceration to his head.

Geo was hospitalized for 10 days before being released to attend Rachel's funeral.

Geo and Savanna Roque are gathered with family for her birthday party. Her Aunt Rosa Llinas shares in the joy of the event too.

Geo's mother moved to Orange to be near family and Geo would follow in Feb. with Savanna. Originally, it was going to be with Rachel too so they could start their new life.

Since the wreck, Geo has suffered from severe depression and often referred to his condition as Post Traumatic Stress Disorder. He also told his brother he thought he was bipolar. According to his brother, it came in "waves,"

"There were good days too and then he would be really depressed," Lazaro said.

For Geo's family, they noticed more changes. Geo who was once the comedian was no longer that person. But the changes to where he ended up were very sudden.

"Savi was his life," Lazaro said. "He really loved her."

Geo saw to it that Savi's needs were always met. He wanted to make sure what she ate would not upset her stomach. Although, she did love ham and cheese roll-ups. He also wanted his daughter to have toys to make her smile and be happy. So much so that the people at the local Wal-mart knew of Savanna and her beautiful smile.

Geo's mother was in charge of making sure she brought a "prize egg" back from Walmart for Savi if she didn't go with her.

If anybody smoked a cigarette around his daughter, Geo made them move way from the area. He also adamantly told his mother he would be the only person to discipline Savi if the need arose.

It was not uncommon to for Geo to get down on the floor with Savi to play. This was their special time together.

Geo's family knew this man, not the one who murdered Savanna. His mother knew he needed mental help, but not to the degree it became. The night before the murder, Geo had began digging a bunker in the back yard because he was expecting the end of the world to occur and he wanted a safe place for him and Savi. With blisters on his hands, his mother made him come inside. But, it didn't end there. 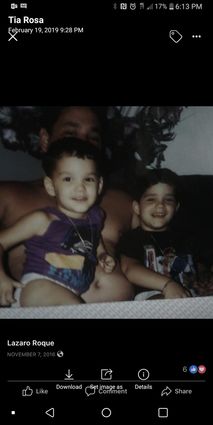 The next day Geo continued with telling his mother of the dangers of the world. She knew she needed to get him help and went to a local judge's office to get a mental health warrant so he would be picked up by police and transported to a mental health facility. She had tried other ways to get him help before, but had failed. This time she was determined to make it work.

But, when she returned home to wait for the warrant to be served, it was too late. Geo had taken a hammer to Savi to remove a chip he believed to be imbedded in Savi's body. He was arrested and charged with capital murder. His bond has been set at $2 million.

Geo's family has visited with him in jail. But, they still don't see the man they knew and loved.

"It's like he is in his own world," Lazaro said.