St. Joseph's Altar: A feast for all 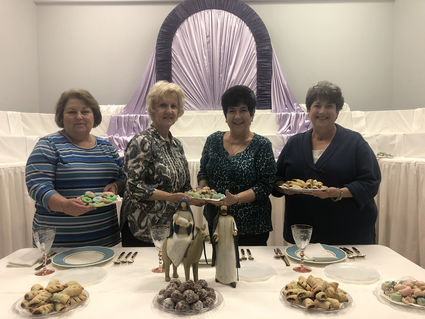 Photo: Cathy Blanda Britain, Carmen Mires Lucia, JoAnn Blanda Waguespack and Geralyn Blanda Vine of St. Mary’s Church are preparing for the St. Joseph’s Altar on Sunday. The public is invited to come enjoy the feast with the members of the church.

St. Joseph's Altar will be celebrated Sunday at St. Mary's Church located at 912 W. Cherry Avenue for everyone to attend.

Following the blessing and prayers, the meal will be served around noon. But, the first to be served will be the special guests at the Saints Table.

"It is open table for anyone who would like to join," said Cathy Brittain, organizer of the event.

This year the altar will be decorated in lavender and shades of purple. The color purple refers to penance during the lent season.In other years, the altar was gold, red and green.

Saint Joseph is one of the most beloved saints among Italian-Americans. As the patron of workers and the protector of the family, he is honored with a feast. Reasons for the altar vary from giving thanks to a favor granted to the healing of a sick, loved one. It is also an opportunity for the local people to help the less fortunate.

In honor of the patron saint, Joseph of the Sicilians and the Universal Church, an altar will be will made at St. Mary’s Parish. Each year, the altar is laden with food and flowers to celebrate St. Joseph’s Feast Day.

The ancient tradition of the altar goes back to the middle ages. At that time, a severe drought ravaged Sicily. As a result, the crops failed and a large amount of people died of famine. The peasants prayed to God for rain and they also prayed to St. Joseph to intercede with God on their behalf. They promised if the rain came they would have a special feast to honor God and St. Joseph.

The rains came and the crops were planted. With the harvest, the people prepared a feast of foods from their crops.

Volunteers have been busy baking at home and others who come to the church have made many, many cookies. The small crunchy delights of goodness are sought after not only by the children who attend the feast, but by adults as well.

The volunteers have made cookies in all flavors such as the round chocolate spice which are symbolic of the rocks Jesus is said to have played with as a child.The many St. Joseph’s Day cookies are stuffed with figs and shaped into patterns such as a ring as a symbol of the weeding ring. The cookies have different icings drizzled on top and flavored with almond, lemon, anise and other spices.

But, the feast does not end with the cookies, there are delicious food dishes to represent the harvest.

One of the traditional and most beloved dishes prepared is Pasta Milanese, which also is the leading entree’ on the altar. The traditional rich tomato sauce is made with a fish base of sardines or anchovies. It also includes wild anise greens, pignola and currants. To finish it off, the pasta dish is topped with fried, seasoned bread crumbs to represent the sawdust of St. Joseph the carpenter.

In addition to the pasta dish, the alter includes a large display of fruits, vegetables,a variety of seafood and special breads. One of the seafood items served on St. Joseph’s Day includes a whole, stuffed redfish. The stuffing is made of Italian bread crumbs, shrimp, crab meat, vegetables and Italian cheeses.

Most of the vegetables are prepared as part of a frittata. But the main vegetable attraction is the stuffed artichokes, which are boiled, dipped in a batter and fried. In addition, there will be various casseroles which include eggplant parmesan, fried cauliflower and artichoke casserole.

Before leaving, guests are encouraged to get a fava bean. Everyone can use a fava bean which is known as the “Lucky Bean” and is dried, roasted and blessed. It has been said that the person who carries it with them will never have financial worries and their “pocketbook” will never be empty.

“There is no charge for the public to come,” Brittain said. "Donations are accepted."

All donations collected will go to area soup kitchens in addition to the leftover food. The donations will also go to charitable organizations in Orange.

Assisting in preparing the feast are members of the Knights of the Columbus who are frying the vegetables and assembling the altar.