After more than 25 years in law enforcement, Eric Ellison has announced his retirement.

"I have been offered an opportunity to pursue a career path in the petrochemical field," Ellison said. "After much prayer and consideration with my family, this is an opportunity we can't pass up."

The Southeast Texas native graduated from Buna High School in 1992. It was in the Buna Junior High School band where he first discovered his love for music and how to read sheet music. He continued through high school as part of the band. Later, as an adult he would once again be in a band,but this time it would be the Lonestar Pipe Band playing the bagpipes.

Buna High School would also be the place where he would meet the love of his life and would later make her his wife. Brandi and Eric have two daughters, Ashlynn and Caitlyn.

Ellison began his career path into law enforcement when he worked as a jailer at the Orange County Jail in 1994. While still working in the jail, he attended the Lamar Regional Police Academy in 1996, and obtained his peace officers license. Upon completion of the police academy, he was assigned to the patrol division as a deputy until 1997.

Ellison joined the Orange Police Department in 1997 and remained there until 2017. Over the years, he worked in the patrol division and the detective division.

His dedication to his profession and the people he served was boundless. He amassed thousands of hours in TCLEOSE training, was a breath test intoxilyzer operator, a licensed TCLEOSE instructor and was a Field Trainer Officer. He was also held an Advanced Peace Officers License.

In addition, Ellison served as union president of the Orange Municipal Police Association and was involved in getting Orange County police officers and firefighters included in the 100 Club of Southeast Texas.

Ellison took his dedication a step further to his fellow brothers in blue when he learned to play the bag pipes. He was self taught and the level of difficulty did nothing to deter him. He started with a chanter in July 2009. The chanter is the melody pipe, played with two hands.

After he mastered it, he moved to the pipes in October of the same year.

Ellison’s interests didn’t stop with just playing the bagpipes. He did some research and wore a combination of the traditional bagpipe uniform in addition to his shirt from OPD.

Sometimes other officers joked with him about wearing the kilt, but in the end he is respected for a job well done by providing a service to their fellow men in blue. After all, Ellison just wanted to help people through the grieving process.

Ellison voluntarily traveled to perform during funerals for firefighters, ex-military, and any other uniformed personnel. However, he was known to play for civilians as well. The sounds of the bagpipes are what people long to hear at solemn occasions which stirs deep emotions.

However, they can be a celebrated sound as well at weddings and parties. The bagpipes with their unique harmonics and steady sound of the drones have people always wanting more.

Ellison gained notoriety when he was featured in THE LAW OFFICER magazine in Oct. 2010, for his participation in an honor guard camp in Goshen, Indiana. He was also selected by the Texas Municipal Police Association as the officer of the month for Dec. 2010.

But, he gained national attention while once again doing his professional duty.

Riley and Emily Portie were returning from the post office on their motorcycle when they were killed by a drunk driver. Ellison had the difficult task of informing next of kin.

When he arrived, their 18-year-old son, Kazzie, was home alone. Ellison knew this time would be one of the most difficult moments in his career.

During their conversation Kazzie revealed he had an upcoming graduation ceremony within a few days. The youngest child of 5 boys told Ellison how excited and proud his parents had been about the upcoming event. Kazzie admitted he wasn’t sure he could go through with it without his parents love and support.

Ellison made the teen a promise he would stand in his parents’ place.

I told him ‘you’re going to walk and your folks are going to have a front row seat and I’m going to be there,’” Ellison said.

Kazzie did attend graduation with his classmates.

True to his word Ellison stood at the end of the stage. Kazzie went through the traditional walk and accepted his diploma and shook the hands of administrators and school board members as he made his way across the stage at the Montagne Center in Beaumont. Kazzie was exiting the stage when he came to where Ellison was waiting.

The pair exchanged glances and each began to cry. They hugged, the crowd stood and erupted in cheers. The noise level was said to be the loudest it had ever been.The emotionally charged moment caused many to shed tears.

Cameras captured the moment and were posted to social media. The pictures,videos and story went viral as people shared with friends and their family members. As a result, the story has gone around the world.

The pair did many newspaper and television interviews which bolstered their notoriety.

Nearly a year after his high school graduation, Ellison was there to support Kazzie Portie as he graduated from the firefighter academy. He now works as a firefighter in Beaumont.

Ellison joined the Bridge City Police Department in 2017 and remained until his recent retirement. 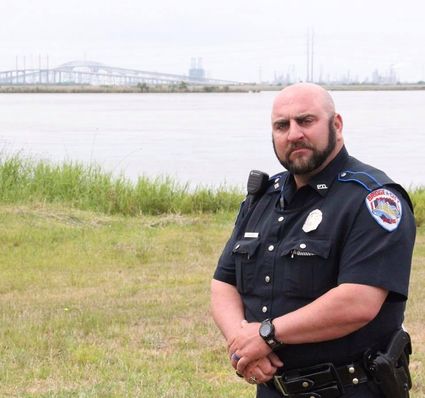 When Ellison was not patrolling the streets, he was doing what had started out as something he loved as a child and grew into a lifetime of enjoyment - fishing. Ellison found a way to share his love of fishing with the public by starting Captain Cornmeal Charters in 2014. He became a USCG licensed captain and with his lifetime of experience fishing the local waterways he set out to catch as many bass, speckled trout, flounder and redfish as he could.

He says he has made a lifetime of memories and looks forward to what lies ahead.

Officer Eric Ellison is now "10-42" which is ending tour of duty.