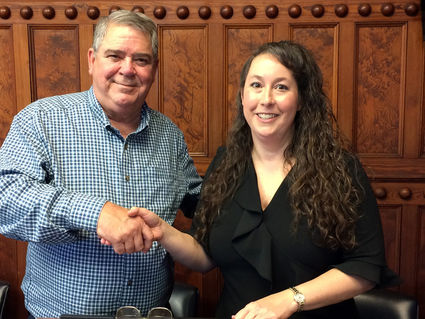 After a months-long nation-wide search for a new CEO, the Orange County Navigation and Port District commissioners found their target in their own boardroom.

Lorrie Taylor, the Port’s Director of Administration and Finance since 2014, is the unanimous choice to succeed Gene Bouillion as Port Director and Chief Executive Officer.

An Orange County native, Taylor earned her Bachelors of Business Administration degree in accounting from Lamar, then passed the exam to become a Certified Public Accountant.

“Let me tell you, Lorrie is wicked smart,” Bouillion said Monday afternoon as headed out the door to begin his retirement with wife Cheri.

“What she doesn’t know, she will learn much faster than I did.”

After working a decade as senior staff accountant for Cavett, Turner and Wyble in Beaumont, she spent eight years as City of Vidor Finance Director and one year as interim city manager.

“And we’re excited to see what the port can do.”

Keith Wallace, the port’s longest serving commissioner, and John Montagne, Jr., one of its newest, were joined by board counsel Scot Sheldon in conducting the search, with Bouillion offering some advice.

“There were 11 applicants, from as far away as Washington state and Chicago, and after comparing their experience and qualifications, we selected three persons as finalists: Grant Bush of Moss Bluff, La., Randall Rogers of Austin, and Lorrie,” Wallace said.

“We interviewed those three a couple of weeks ago. Each finalist provided a resume and the search committee did background checks.

“It worked out that Lorrie had more hands-on experience than the others who applied. We’re darn glad to have her. I’ve got full faith in Lorrie to do the job.”

Not deep or wide enough for modern ocean-going ships, the Orange port has five berths being rented to companies to fleet and outfit their barges there. Two of the tenants, Bludworth Marine, and Sienna Marine, each employ between 75 and 100 workers, Bouillion said.

Besides jobs, the tenants provide the port rent payments and other dockage fees that make up about $1.6 million of the port’s $2 million in annual revenue.