Directors Adam Conrad and Jody Cormier and some of the cast members were a little concerned when they did the first read through of the Fifth Gospel about a month ago. “Has Mary read this?” Conrad asked the first night.

Even though the play had been performed 20 years ago for the Southeast Texas Hospice Mystery Dinner Theater, they were concerned, with the changing climate in the country, how it would be perceived.

All their fears were alleviated with the first peals of laughter from the crowd, including those of the Rev. Joseph P. Daleo, who was in attendance the first night.

Belinda Thibodeaux of Southeast Texas Hospice told the cast after the performance, “Y’all did a great job! I think it is the best one we’ve ever had and I have been to all of them. It was so funny.”

Indeed it was funny when Father Guido Salvucci’s mustache kept coming off and Jammy Mae Barker’s blond wig went flying. There were many more fun moments, some planned, some spur of the moment.

This was the 30th year the annual event has been held. It raises $10,000-12,000 each year. The money is used to purchase medication and other needs for their clients. In addition to the play, they also have both a silent and live auction each night during the two night event.

The play pokes fun at religious stereotypes and incorporates a take-off of some classic Saturday Night Live characters, such as the Church Lady, “Isn’t that special,” immortalized by Dana Carvey and Don Novello’s Father Guido Carducci. It also alludes to Jim and Tammy Faye Baker in the form of characters Tim and Jammy Mae Barker.

The Fifth Gospel says the wise men went to the wrong house the night Jesus was born. They showed up at his aunt and uncle’s house where they also had a child born that night, which they named Vincent.

“Cousin Vinny?” asks Fr. Salvucci. You can see how absurd it gets. Dr. Rollingstone says the Fifth Gospel states Vinny was responsible for the miracles and was the one with the powers, but he was a bit of a scamp and Jesus was the one with all the charisma and good looks, so they kept Vinny under wraps.

It’s obvious why some would want to suppress it, while others would want to use it. The power struggle ensues and Shyster winds up dead. Who did it? Was it the Baptists that were looking to have new material to peddle to their flock? Maybe it was the Catholic priest to keep the truth under wraps. Heck, maybe it was the bartender. Regardless of whodunit, Southeast Texas Hospice was the true beneficiary of the night. 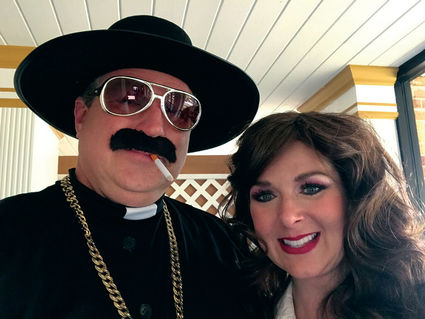