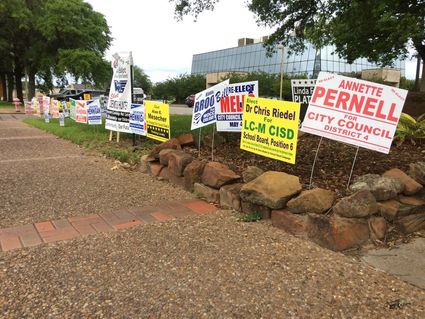 Photo: Five cities and school districts in east and south Orange County are holding May 4 elections. Early voting for all except West Orange is being held at the Orange Public Library and two other locations. RECORD Photo: Dave Rogers

Early voting for the May 4 local elections continues through Tuesday, April 30, primarily at three sites.

Voters in all but one of the Orange County races – for school districts or city councils – may vote in any of those three: Orange Public Library, 220 N. 5th St.; Bridge City Administration Building, 1031 W. Roundbunch Road; and Raymond Gould Community Center, 385 Claiborne Road in Vidor.

Voters in the West Orange council election must vote early at the City of West Orange City Hall, 2700 Western Ave.

On Election Day, Saturday, May 4, all Bridge City voting will be at the BCISD Administration Building, 1031 W. Roundbunch Road.

Many Orange County seats up for election drew but one filer, often the incumbent.

An even more crowded race is for the West Orange-Cove school district, where all seats are at-large. Incumbents

Incumbent Jerry McInnis faces Cory L. Mitchell for Bridge City ISD Place 4; and Josh Fisher and Chris Riedel face off for Position 6 on the LCMCISD board.

Also on the ballot in Bridge City is a $46.1 bond issue that will go mostly toward building a new middle school.