OCP still treading water a year and a half after Harvey

Harvey gave a heavy blow to Orange Community Players, Inc. They are still trying to recover from the storm. A year and a half later, they have missed two complete seasons of productions, but are still keeping a presence in Orange while attempting to rebuild.

Hurricane Ike flooded them the first time in their downtown location in 2008. Less than a decade later, Harvey came to call.

The increased cost of future flood insurance made the feasibility of staying in the same location impossible. They purchased the double sided movie theater on the other side of town that did not flood and had been shut down. Efforts are ongoing to remodel the theater to meet their needs.

“The OCP board of directors has established a committee to work on the details regarding the renovation project,” said Codie Vasquez, vice president of OCP. “There is a lot that goes into it and we want to make sure we make the best decisions moving forward.

“The committee is currently working on gathering a full cost estimate for the entire project, so that we can prioritize the most immediate needs and what can be done with the funds we have available,” said Vasquez.

She said, “One idea is to open one side as a black box style theater so that we can begin holding productions while the rest of the building continues to go through renovations.”

Lack of a theater has not stopped OCP from participating in the community. Through the generosity of the community in sharing space, Kate Robards came into town and performed a one woman show at the Orange Train Depot last year, to raise money for OCP and Beaumont Community Players offered their theater for an encore production of Dixie Swim Club.

They were able to continue their Young People’s Theater Workshop last summer, with the aid of First United Methodist Church and Little Cypress-Mauriceville High School. First UMC offered their facilities for the classes and production practices. LCM loaned the Bear Stage Player’s stage for the production.

This year, Play Today has offered them practice space and the production will be held once again at LCM July 19-21

The Young People’s Theater Workshop is a month long intensive in theater production for children that ends with a show for family and friends.

“Watching the kids, of all ages and backgrounds, come together and put on a production in four short weeks and learn a lot about live theater at the same time, is absolutely thrilling,” said Andrea Eymard, OCP Board member. She is also on the workshop committee.

Sami Bohn and Kymmi Wagner pose as Wonder Women with Abigail Rollins as Groot looking on in last year’s production of “Heroes and Villians, Too The Quest for Schmeep.” RECORD PHOTO: Penny LeLeux

It’s the perfect opportunity for any aspiring young thespian that won’t break the family bank, because this month long summer camp only costs $25. Registration for this summer’s workshop will be held May 18 from 2 to 5 p.m. at 2524 Hwy 87 South, Orange (Justice of the Peace Dubose-Simonton's office). YPTW 2019 will be held June 17 - July 21. 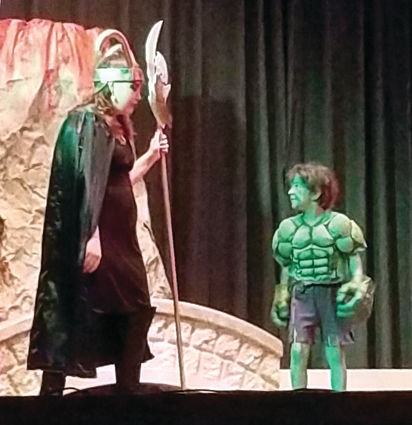 “They have so much fun and it shows in how hard they work to make a great production!” said Eymard.

OCP recently reactivated its Junior Board this summer after the workshop. They just completed a fundraiser “Egging” people’s yards for Easter.

Members of OCP will also be participating in the upcoming Depot Day, May 4 at the Orange Train Depot Museum, by providing the entertainment.

Even though they are still under construction, they have no intention of “going under.” They look forward to returning to a full season in the future, with the continued help of the community.