The Service League of Orange held their annual luncheon Thursday at the Orange Train Depot Museum.

Recognizing the year’s achievements, announcing scholarship awards and passing the gavel to the incoming president are the main features of the yearly event, topped off with a featured speaker. This year’s speaker was Mayor Larry Spears Jr.

He gave a very inspired talk on “Bloom Where You Are Planted,” the theme of this year’s event.

Spears said he doesn’t like politics and when asked if he was conservative or liberal, Democrat or Republican, he replied, “Dude, I don’t pay attention to any of that at all.”

He said he just wants to give back to the community.

“God gave you something special to give back,” Spears said. “You were created to give back to humanity. Until you figure out what that is, you live life as an experiment.”

He is excited about where Orange is headed. “We are starting to realize our full potential again,” he said.

Of the Service League of Orange’s part of Orange’s revitalization Spears said, “You’re not just talking the talk, you’re out there making it happen.”

They had many accomplishments this year.

Nine grants were awarded to area organizations totaling $4,507.00, given out at the Toy Coffee.

They announced $3,500 in scholarships.

Recipients are Rylee Locke and Geoffrey Hill from Little-Cypress Mauriceville High School and Ngoc Nguyen Phan from Orangefield High School each to receive a $1,000 scholarship from the Service League for the school of their choice and Carissa Slaughter of Bridge City High School was awarded a $500 scholarship to attend Lamar State College-Orange in the medical field.

This was the first year the Service League has worked the Salvation Army as a placement. Volunteers stocked food in the pantry that had been donated or purchased from other food banks and helped bag toys at Christmas.

Gift’s Etc., the leagues gift shop, was manned by 16 active members and two sustaining members showing a profit $3.432.17 for the months August through April, after all expenses were paid.

Partnering with the Stark Museum of Art, the leagues Fine Arts Program visited 1,300 students in 1st and 4th grades at area with a watercolor project for the 4th graders. The 1st graders did a sculpture.

This year’s Toy Coffee was held at the home of Jr. and Leslie Leger, 602 W. Orange Avenue, in the Historic District. The 111-year-old home was built by James & Mary Childers, parents of Nelda Stark.

Members worked the Coke Box at the Lion’s Carnival to reciprocate for the Lions volunteers who always help with the Toy Coffee.

Volunteers joined with Sabine River Ford at Halloween, decorating one of their vehicles and giving out candy at their Halloween Party. 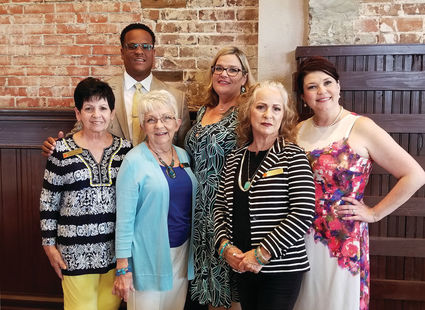 At Christmas, they worked with the Friends of the Orange Depot at their Christmas Extravaganza. They had a booth with Christmas items from the Gift Shop and sold over $500. They also set up a booth for “Depot Days” and sold over $200.

President Theresa Glidden finished her report stating the ladies have volunteered a total of 3,326.5 hours thru the month of April. She then passed the gavel to Codie Vasquez, as the incoming president.

The meal was catered by Mike’s Diner. Joann’s Nursery provided the live flowering plants for the centerpieces that were arranged by the Leaf and Petal Garden Club. The floral centerpieces were also used as door prizes.