How many cooks are too many?

The Orange County AgriLife Extension Office is turning out 60 of them this week during its Summer Youth Cooking Camp.

“When you’re older and have your own family, you need to know how to cook,” Brady Landry said when asked why he enrolled.

“I didn’t even know you could make noodles out of zucchini,” Alissa Tripp said.

James Scales said what no one knew was how popular a summer cooking camp could be.

“We had to close registration after only 3 and a half hours, because it was full,” said the County health inspector.

“Last year, it was totally full in 9 and a half hours, and we thought that was good.”

Fallon Foster is the county extension agent and is involved in many projects, among them 4-H Clubs. She and Scales are being assisted by 35 volunteers in the camp at the Orange County Convention and Expo Center.

Many of the volunteer are nursing students from Lamar State College Orange and others out Tuesday represent the Orange County Master Gardeners.

“We’re just introducing kids to good food safety and teaching them how to cook,” Scales explained as he held the barbecue sauce in a cup so his young cooks could brush it on their shisk-a-bobs.

“This camp is to promote 4-H and to get kids interested in cooking,” Foster said. “It’s science-based, involves mathematics and we learn food safety.

“It’s a really hands-on camp to teach kids skills they can bring home and use throughout life.”

Monday’s first lesson was about nutrition, the importance of proteins and calcium. After that, Monday through Wednesday they are divided into four groups that rotate hourly learning to cook different meals.

Thursday, the kids will be involved in a cooking challenge based on the TV show “chopped” with each receiving ingredients and having to make their own recipes.

Friday is awards and parents day.

Tuesday, while one group worked on its grilling skills, another was learning to make nachos with bell peppers instead of corn chips, a third was making garlic chicken with zucchini noodles and a fourth made French toast with strawberries and Nutella.

“I liked them both but I really liked the zucchini pasta because it was spicy,” Tripp said. 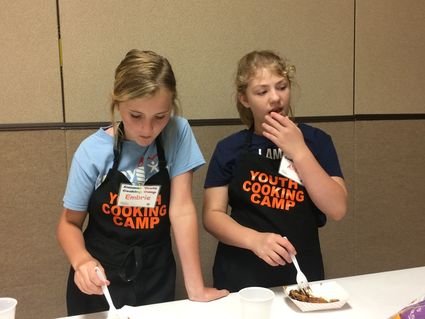 “I liked the chicken. It tasted sweet. The artichoke we made today tasted pretty good. But it could have had more flavors.”

“The tuna sandwich we made yesterday, that was delicious,” he said.