Moore moves from Strutters to Rangerettes

It was the realization of a lifelong dream.

And Macie Moore’s selection last week as a member of the Kilgore College Rangerettes kept a string going for her mentor, Cathy Riley.

Moore became the sixth Bridge City Strutter to claim a spot on the first precision dance team in Texas during Riley’s 23 years as director of the Strutters.

“I’ve been pretty much planning on doing it my whole life,” Moore said of donning the red, white and blue Rangerettes outfit and high-kicking her way through her first two years of college.

“I’d always heard about it and, once I got on drill team, it became a little more realistic because my director was a Rangerette.”

That’s right. Riley was a Rangerette, after her time as a Nederland High Westernaire and before she added dance team director to her resume as an educator.

“And for four years, she was that good.

“I’m so ecstatic she made it. She gets to live the experience I had.”

The Rangerettes, known for their high-kick routines and distinctive outfits of red blouses, short blue skirts, white boots and white western hats, are celebrating their 80th season in 2019.

The team was created by Gussie Nell Davis in 1939 when Kilgore College Dean B.E. Masters wanted something that would increase the female enrollment at the East Texas school.

It was also hoped it would keep fans in their seats during football halftime shows and away from drinking alcohol under the stands.

They have performed at inauguration balls for U.S. Presidents Barack Obama and Donald Trump, and Macy’s Thanksgiving Day Parades.

Riley’s first Bridge City student to make the cut for the Rangerettes was Kayla Kenney, in 2005.

“It’s not for everybody,” Riley said. “It is hard. You need a lot of fitness in the tryout.”

Moore was among 91 girls asked to try out as freshmen on the squad. Only 34 were chosen.

“The tryout’s about a week long and it’s really crazy,” Moore said. “It’s very intimidating. You go all week and all of the girls are amazing.

“You have to watch all of them. Then you’re kind of comparing yourself: ‘Am I as good as her?’”

Moore is the product of 16 years at Debbie Broussard’s Debbie’s Dance Etc. in Groves.

“I took just about every single class that I could to be exposed to every type of style,” Moore said.

“I always thought I liked studio dance more, but then I tried out for the drill team and fell in love with it immediately.

“I loved the precision and high kicks. Then I thought the Rangerettes would be perfect -- that’s what they’re known for.”

“A three-year officer, that’s pretty cool,” Riley said. “She was a role model for younger Strutters to emulate. Always professional. The Real deal.

“So, I’m excited she got to go on and dance some more at the college.”

Moore plans to major in dance at Kilgore, then plans to go to Texas A&M her final two years, majoring in business.

“I plan to direct a drill team, or open a dance studio,” she said.

With their complement of sophomores, the Rangerettes will number about 70 members this fall, when they celebrate the end of their juco football season with a trip to England, to perform in Birmingham and London.

The sophomore Rangerettes just returned from a trip to perform in Italy.

“The Cotton Bowl and the England trip is all they’ve told us about so far,” Moore said. “We start practicing in two weeks.” 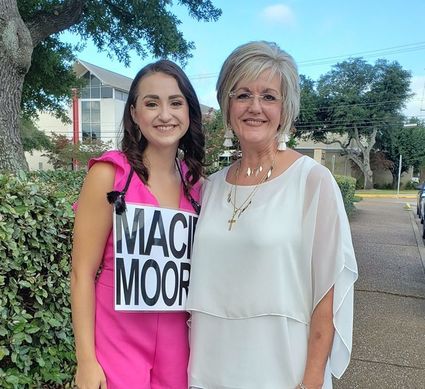 Riley will be along with them, in spirit.

“There are so so many neat things they teach the kids, it’s pretty cool,” said the Strutters director.

“They’re constantly doing things for other people, not themselves. Macie’s done it before, but now she gets to do it bigger.”