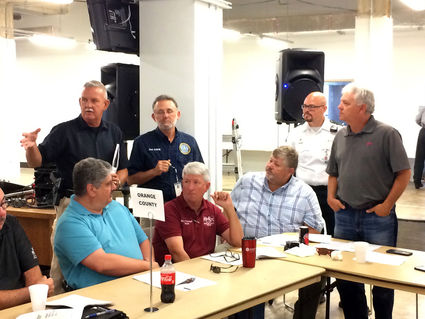 All hell was breaking loose.

The worst you could think of – and a lot you’d never think of -- was raining down or blowing up.

But Orange County leaders kept their cool as they dealt with one possible terrorism scenario after another at last week’s Complex Coordinated Terrorist Attack Executive Leadership Tabletop Drill and the Beaumont Emergency Operations Center.

“It’s just a sad state of affairs that we have to train like this for situations like this,” John Tarver, Orange County’s Chief Sheriff’s Deputy, said as he left the three-hour exercise.

“But I’d rather be trained and have plans for action, than not have any plans at all.”

The exercise was the third and last tabletop drill put on by the Southeast Texas Regional Planning Commission’s Criminal Justice and Homeland Security Division.

In 2017, SETRPC, one of 19 councils of government in Texas, was one of 141 applicants across the nation and one of only 26 to be awarded a $1 million Department of Homeland Security/FEMA Grant to develop a Unified Regional Response to a Complex Coordinated Terrorist Attack.

The grant runs for three years and will culminate next year with an area-wide, full-scale exercise.

SETRPC covers the area of Jefferson, Orange and Hardin Counties. All three county judges took part in the Aug. 8 exercise, as did mayors of most cities and their emergency management coordinators and many of their first responders.

Robert Crane, operations supervisor for Acadian Ambulance Service, was part of the team.

Another dozen or so Orange County public safety officials took part, as well.

Each county was assigned a group table and others were set aside for the biggest cities, Beaumont and Port Arthur.

Kevin Clement of the University of Houston ran the drill and read from a timeline a list of well-coordinated terrorist attacks that dealt death, destruction and mass chaos equally across the three countries.

The leaders worked together to address the make-believe worst-case scenarios that Clement described and prepare to guard against others.

“This is the first one [terrorism drill] I’ve attended, but it’s very similar to what we do for storms,” said Gothia, who was a first-year commissioner when Hurricane Harvey hit in Southeast Texas in 2017.

“This is similar to Harvey in that all the counties and communities were in the same situation, and we couldn’t get help from our neighbors. We had to reach outside Southeast Texas for resources.”

Organizers of the drill were not looking for publicity but for teamwork. Handouts given the leaders were taken up at the end of the drill and shredded.

No one wanted to give anybody any ideas.

“This is too much,” Clement said, “but this is what happens in a complex coordinated terroristic attack.”