This was the first year Boomtown Film and Music Festival organization teamed up with the city of Beaumont. The name was changed to BMT Film Fest and classic foreign films were shown all week along with festival selections. Saturday the 48 Hour Film Race submissions were screened and the awards ceremony was held.

There were over 200 submissions to the festival this year from all over the world.

This is only the second year they have had a faith based category. Roy Mazzagate III’s film, “Waiting For You,” was a project he said the Lord gave him.

“It's a healing film for families who have suffered preborn or newborn infancy loss such as miscarriages, stillbirths, SIDS or other neonatal passings where the family never had the chance to have any kind of relationship with the child,” said Mazzagate. “The premise of the film is that child, in heaven, talking to the parent.”

Mazzagate has been making films for 10 years.

“I’m very humbled that this was [“Waiting for You”]’s 13th award in 22 officially selected festivals, nationally and internationally.”

Mazzagate said he pondered on the subject and what he wanted it to look like for about a year before doing anything. “I wrote the script in about a day,” he said. “I let a few mothers who had experienced this type of tragedy, including my wife, read it. They all gave it their blessing. I was excited to have my daughter play the key role and do the voiceover. She was equally as honored to be the voice and represent all of the babies that have passed on, including her sibling.”

Mazzagate said they filmed it in about four hours in two locations, Claiborne Park and an empty field in Little Cypress. “I edited it and had it completed in a couple of days.”

Since he does film as a ministry he said he doesn't like to force anything. “So whatever is next, I'll wait on the Lord to provide that.”

Orangefield’s Penny LeLeux took home the award for short screenplay for “Life with Bill: Waiting on Cahill” This is LeLeux’s first script that was written as part of a challenge last year.

“It is about the struggles and amusements of living with my brother-in-law Bill, who was born with Down’s syndrome and is 60 years old,” said LeLeux. “We also live on a family compound surrounded by family members. Just like a rose bush, it has great beauty, but it can also get pretty thorny at times. Needless to say, it’s a dramedy.”

It started as a short film screenplay, but with 16 years to draw on, she is working to convert it to a pilot for a potential series.

Travis Myers of Orange was featured in a Record article a couple of weeks ago. He was one of the filmmakers on the 48 Hour Film Race team “Make Films Great Again.” Their team took 2nd place for their entry, “Flat Out Wrong,” a spoof on a Flat Earth Society documentary. Multiple members of that team are from Orange.

Seth Sonnier of Mauriceville headed up team “Mean Girls” which took 3rd place for their entry “The Bad, the Worse, and the Grotesque” a western comedy.

“This was Seth’s first time to start and finish a script and take to production and well it was a 48 hour race so I’m pretty proud of the dude,” said Seth’s wife Heather on Facebook. “I’m just happy that Seth is doing what he loves. Glad to ride along on this new journey.”

Congratulations to all the winners of BMT Film Fest. Here is the complete list of winners from all over the world. 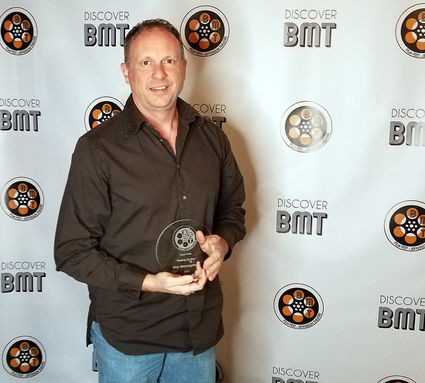