The city began accepting payment for water and sewer bills at what used to be the teller windows of the First Financial Bank.

“There is a level of excitement among the [city] staff as well as the community,” said Jay Trahan, city economic development director.

The move has been three years in the doing.

The city agreed to buy the former First Financial Bank location when the bank opted for a new building next door on N. 16th St.

But the move could not be completed until construction was complete on the new bank, and contractors could make some updates and minor changes to the old bank building.

Orange’s City Hall had been at the Green Avenue location since 1944, after buying the former home of E.W. Brown, Jr., a prominent Orange businessman and philanthropist.

Additionally, the city’s Convention Visitors Bureau was housed behind the old City Hall.

Now, all those offices are sharing space in the 24,000-square foot new City Hall.

Additionally, there is leftover office space at 812 N. 16th St. that will be available soon.

“There will be an opportunity for some organizations that might be interested [in office space],” Trahan said.

“Once we get more settled at City Hall, we’ll be looking for getting the perfect fits there.”

All in all, about two dozen city employees will office in the new building, which features new flooring except in the huge lobby.

The CVB office is right off the lobby, already filled with travel brochures.

“One of the most important things for us is having a 16th Street presence,” Trahan said. “You know how much we’ve been working on 16th Street as the gateway to our city.

“Having the CVB present where visitors can easily find us, that visibility and presence, will make a big difference for years to come.”

City manager, city secretary and EDC offices are all tucked behind the EDC, with a huge boardroom and a spacious employee break room. City finance offices are located behind the customer service windows. 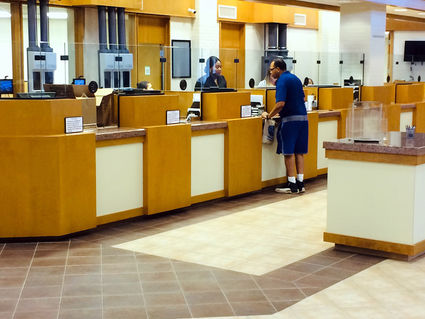 The bank left behind most of its furniture, but Tuesday was dedicated to moving employees’ prized pieces from their old offices – and their files.

“The view from my [old] office was great,” said Trisha Anderson, city secretary.

Her second-story office on Green Avenue overlooked Stark Park, the Stark Museum of Art and the Stark House.

“But I will not miss anything else,” she said. “Before, my files were in three or four places. Now I’ll have on file room where everything will be. All in one place. All in order.”