Budget reviews in the area 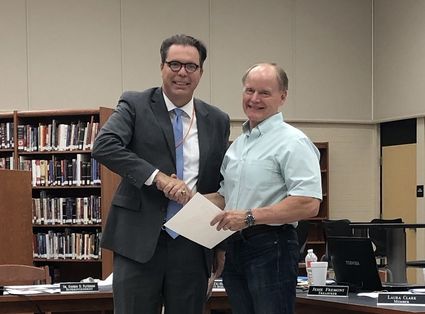 Photo: Stephen Patterson, Orangefield schools superintendent, shakes the hand of Kenneth Smith, an owner of K-Dan’s Grocery, as the district presents a Bravo Award to the store after it served free breakfasts to Orangefield students and staffs on the first day of classes.

The difference is largely due to the state’s increased payments to schools aimed at lessening taxpayer burdens.

The district’s “rebuild” after flooding by Tropical Storm Harvey two years ago is virtually complete. Roof replacements are 80 percent complete and should be finished in the next month, said architects from Claycomb & Associates.

Reporting to his board members Monday night, he said enrollment was 1,800 students just a week and a half into the school year.

“Enrollment will peak after Labor Day,” he predicted, “so we’ll have no problems with our budget numbers.”

Budget figures were based on worst-case scenario numbers under last year’s enrollment.

On the first day of school, Orangefield’s football players and drum line were on hand to greet elementary schoolers as they entered the building.

This came after K-Dan’s Grocery next door fed free meals to Orangefield students and staffers.

Kenneth Smith, a K-Dan’s owner, accepted a “Bravo Award” presented by the school board to he and owners Dan Brack and Danny Brack.

The state rate for mileage is 58 cents per mile, he said Monday night at the city’s second budget workshop. 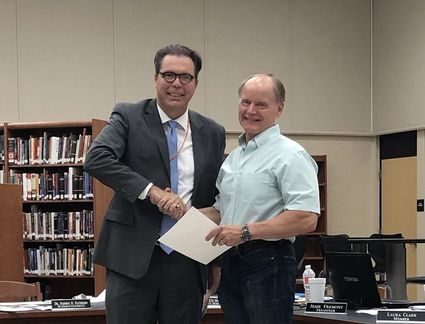 “Over the last three years, the mileage is so much less than it would cost to purchase, insure and maintain a vehicle.

The mayor rolled $20,000 of those funds into the parks budget for new Christmas decorations.

The proposed budget was the same $3.2 million as proposed at the first budget workshop, a slight increase over last year’s $3.04 million.

More than a third of the city budget, $1.25 million, is in salaries and benefits for a nine-person police department supported by two full-time clerks.